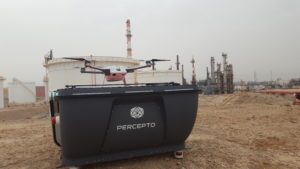 Today, autonomous inspection leader Percepto has revealed that its drones have been granted Beyond Visual Line of Sight (BVLOS) approval by the Dutch civil aviation authority (ILT). This is the first BVLOS approval Percepto has obtained under the new European Aviation Safety Association (EASA) drone regulations that came into effect this past January.

The new approval will allow Percepto partner Falcker to give their customers the ability to conduct BVLOS drone flights using Percepto’s drone-in-a-box system, with an operator able to easily manage and monitor pre-scheduled autonomous operations from a control room. Falcker is set to carry out its first drone inspections with the new approval later this month, with plans to expand into Germany and Belgium in the near future.

The new EASA drone regulations enable approvals granted by one member state to be used in similar conditions throughout all EASA member states. The acquisition of its first BVLOS waiver in Europe sets the stage for Percepto to obtain future waivers throughout Europe, echoing its success in the United States, Australia and Israel.

Percepto’s drone-in-a-box solution is integrated into Autonomous Inspection & Monitoring (AIM), an end-to-end software solution. The industrial-grade, weatherproof drones feature a high-resolution RGB camera and a thermal camera, and take off autonomously from a docking station before flying routine inspection missions with imagery processed by Percepto AIM. The drones are also capable of carrying out flights as needed in disaster situations. Upon the flight’s completion, the drone returns to the box to charge.

“We are thrilled about this latest BVLOS achievement, which will make a big impact on expanding drone inspections in the Netherlands and across Europe,” said Dor Abuhasira, CEO of Percepto. “The Percepto team looks forward to continuing to work with Falcker as it further develops its autonomous drone program to serve its customers with a new level of security and efficiency.”

“After years of consulting with the Dutch civil aviation authority, we are extremely pleased with achieving this designation,” added Duco Boer, CIO of Falcker. “Our first flights with Percepto’s drone solution will be at a tank terminal this month, and we are excited to implement autonomous drone inspection solutions at projects across Europe in the near future.”