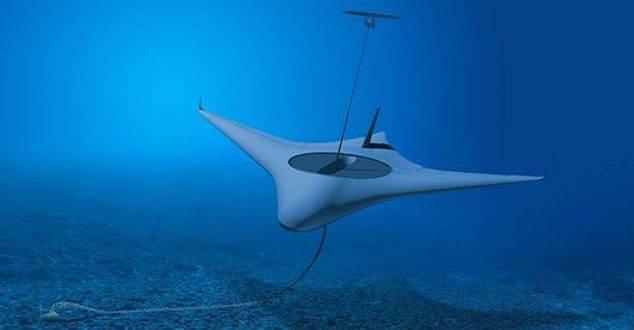 New class of ‘extra-large’ Manta Ray underwater drones will be built by Lockheed Martin after Pentagon awards the firm $12.3 million

By Stacy Liberatore For Dailymail.com

Lockheed Martin, a leader in global security and aerospace, has been awarded a $12.3 million contract to start the first phase of the Manta Ray program.

The contract from the Defense Advanced Research Projects Agency (DARPA) will fund the research, development and demonstration of an ‘extra-large’ unmanned underwater vehicle.

The military machine will be the first in a new class of long duration, long range and payload-capable unmanned undersea vehicles, which carry out missions without the need of human interference.

The ultimate goal is allowing soldiers to continue their mission on land without being interrupted to power, maintain and refuel an underwater machine.

Lockheed Martin, a leader in global security and aerospace, has been awarded a $12.3 million contract to start the first phase of the Manta Ray program (artist impression). The ultimate goal is allowing soldiers to continue their mission on land without being interrupted to power, maintain and refuel an underwater machine

According to the contract, 52 percent of the work will be conducted in West Palm Beach, Florida, with other work taking place in Cherry Hill, New Jersey and a variety of locations across the US.

This contract has an estimated completion date of January 2021.

‘Unmanned undersea vehicles (UUVs) that operate for extended durations without the need for human-present logistic support or maintenance offer the potential for persistent operations in forward environments,’ DARPA explains in a statement.

The American agency announced plans for its Manta Ray program in 2019 with the goal of shipping large payloads over long distances without the need for maintenance or refueling.

The Manta Ray program will leverage or develop novel propulsion, sensing, and energy management systems to achieve high reliability and extended endurance across a wide variety of maritime environments.

Although DARPA is looking to design a new class of underwater drones, the government agency revealed last year that it is testing technology in its efforts to surveil the world’s underwater terrain and enhance its ability to detect enemy ships.

By harnessing marine organisms’ ability to sense even the most minute disturbances in their environments, the Defense Advanced Research Project Agency (DARPA) — the U.S. Department of Defense’s experimental research arm — says it could be able to preemptively discover even the smallest autonomous vehicles.

Among the potential enlistees of the program called The Persistent Aquatic Living Sensors (PALS), are goliath grouper, black sea bass, snapping shrimp, and other even smaller organisms like bioluminescent plankton and other microorganisms.