Brought to you in partnership with Raytheon Missiles & Defense

Among the many developments in modern warfare dramatically illustrated throughout the war in Ukraine is the prevalent use of unmanned aircraft systems (UAS).

However, the UAS threat is nothing new and has been increasing globally for some time, explains Abel Ghanooni, Senior Director for Short Range Air Defense Programs at Raytheon Missiles & Defense.

‘We’ve seen attacks in the Middle East, on oil fields. We’ve seen the ability to integrate UASs into more complex integrated attacks, with cruise missiles and RAMs [rocket, artillery and mortar],’ he says.

‘We are seeing it in Ukraine… small UASs are changing the battlespace,’ he says, with Raytheon and its customers focused on how this could impact the future battlefield.

Counter-UAS (C-UAS) solutions have increased as a focus for the US Department of Defense in the past two years, notably through the establishment of the Joint Counter-small UAS Office (JCO).

The JCO has ‘assessed all the different capabilities that existed, that were deployed and really [aims to] identify the most mature and the most capable and down-select those capabilities, so that there could be a strategic view and a more consolidated view’.

Raytheon provides technologies for the Low, Slow, Small Unmanned Aerial Vehicle Integrated Defeat System (LIDS), one of the capabilities selected by the JCO.

Its contribution comprises two of the company’s major C-UAS technologies: the Ku-band Radio Frequency System (KuRFS) multi-mission radar, and the Coyote UAS, which operates as a dedicated C-UAS platform.

The company has worked closely with the US Army’s Integrated Fires Rapid Capabilities Office (IFRCO) on developing and maturing the capability.

LIDS benefits from the combination of KuRFS, Coyote, and technologies such as Northrop Grumman’s Forward Area Air Defense Command and Control (FAAD C2) system. Indeed, the radar and Coyote effector are closely integrated with the C2 system.

‘When you’re combating this threat, you really need to look at the total kill chain – detect, identify, track and defeat,’ Ghanooni explains.

LIDS functions independently as a highly capable C-UAS capability. However, the next step will be integrating C-UAS into a wider, ground-based air defence architecture.

For example, LIDS could be integrated with Patriot surface-to-air missile systems or the Norwegian Advanced Surface-to-Air Missile System (NASAMS) to provide a layered defence against short, mid and long-range threats.

Ghanooni says this would provide ‘an integrated capability to combat a complex scenario, as we’ve seen in the past in the Middle East, where you have a set of small UASs integrated with a set of cruise missiles’.

Raytheon is working closely with its military customers to define a long-range technological roadmap and technical requirements, asking what the threats will look like in five to 15 years.

‘What are the requirements associated with that, to start developing those capabilities today to combat those threats in the future?’ says Ghanooni.

The company is not only focused on technological advances, but on doctrine, organisation, training, materiel, leadership and education, personnel and facilities, or DOTMLPF. He emphasises that these elements must be integrated and sustained as part of the broader architecture.

‘What does the future look like? Do we need to develop new capabilities, or can we continue to mature the current capability?’

The company has developed a close and effective working relationship with IFRCO. LIDS was demonstrated at the US Army’s Yuma Proving Ground in August 2021, while another recent test event helped improve the lethality of KuRFS and Coyote.

The capability can now operate ‘at longer ranges and higher altitudes to handle the evolution of the threat we’re seeing today’, says Ghanooni.

‘It’s an iterative process. We’re constantly working together to upgrade and mature our systems and our capabilities.’

Raytheon is also working with the US Army to extend C-UAS capabilities to international allies. Many of these countries already operate Patriot or NASAMS, so they could benefit from the same integrated approach that LIDS brings for the US customer.

‘They’re seeing this [C-UAS] problem every day, and there’s a need and a demand for this capability,’ he says.

‘We’re working with them – in concert with the US Army – to support their demand and their need, to get them capability and hardware as fast as possible, and to understand what their requirements are, what their architectures look like, and how we can integrate this as part of a layered, system of systems approach.’

As the UAS threat proliferates worldwide, in Ukraine, the Middle East and beyond, Raytheon will analyse how the systems are used, developing roadmaps to mature the capabilities of the US and its allies and stay ahead of the threat.

‘We’re seeing them go faster and become more manoeuvrable, providing [increased] protection against certain types of technologies,’ Ghanooni says. ‘We will take that information and work in concert with our army customer to improve and enhance our capabilities to combat these threats.’ 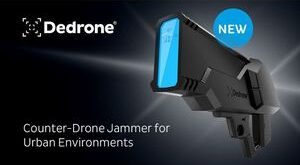