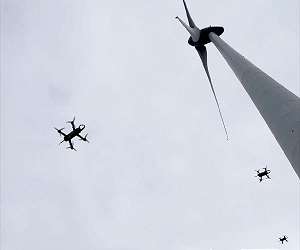 At a secret location in the Ukraine city of Lviv, the windows taped up to ward off unwanted attention, underground hobbyists improvise deadly drones bound for the front line of the war against Russia.

On a cluttered table the x-shaped frame of one drone stands among bundles of plastic propellers and sachets of minuscule screws.

Soon it will take flight with its payload: a wine bottle-sized anti-tank grenade designed to plunge on Russian armour.

Two other drones are already affixed with quad propellers, their squat bodies gaping with miniature bomb bays to rain explosives on Russian infantry challenging Ukrainian defenders to the north and east.

One more — the shape of a stealth bomber, the size of a bird of prey — will conduct reconnaissance missions for artillery squads, spotting targets and marking them for incoming fire.

Since Russia invaded, the Nebesna Kara (“Punishment from Above”) collective has made around 40 such specialist drones for the Ukrainian military.

Before February 24, its six members were friends in the drone racing community.

“Unfortunately everything changed,” said Alex, a member who declined to share his full name for security reasons.

Analysts say Ukrainian forces have been outmanned and outgunned in the war with Russia. But their dogged defence has thrived through local knowledge, hit-and-run tactics and technological sabotage.

In the early days of the invasion it was feared the capital Kyiv would fall to a 40-mile (65-kilometre) long Russian armoured column approaching from the north.

It has been reported that mobile teams armed with drones played a key role in parrying that attack by marking targets for air strikes, forcing the convoy to disperse.

“This is a technique for reconnaissance and adjusting artillery fire,” said Nebesna Kara member Dmitriy, who declined to be further identified.

“Now there’s a great demand for such subversive equipment,” he said.

The collective — which also has 10 “advising members” and draws on the knowledge of 877 enthusiasts via online chat — receives orders from military specialists in conflict hotspots.

Their flying Frankenstein’s creations are put together from over-the-counter kits, 3D printed parts and components ordered from a Chinese online retailer.

To one end of the room the parts are strewn across a workbench — circuit boards dotted with microchips, threads of electric wiring, bulbous electric motors.

The Ukrainian military has heavily relied on donations to shore up the defence of the country. Foreign nations have poured in “lethal aid” and everyday citizens have been solicited for cash.

Alex says their miniature drone programme operates in much the same way. Specialists tell them what they need the drone to do and they tailor-make it with crowdfunding cash.

But the benefits far outweigh the costs.

On his phone Dmitriy shows a video from the perspective of a drone, buzzing along a Russian trench and highlighting weapon positions cached in the churned earth.

“If you have a normal pilot that is used to operating this stuff, he can go over this trench and in five minutes he’s going to have all the information that he needs,” said Alex.

“An iPhone costs more than this equipment,” he added.

To the side of the workshop are stacked the outgoing parcels of drones and spare parts.

One is bound for the southern city of Mykolaiv. On Tuesday a missile strike punched a hole in the regional government building there, killing 28.

Prepared for shipping, it is accompanied by a handwritten note in red and blue felt tip addressed to the Ukrainian pilot — and maybe also to the Russian troops outside the city gates.

“From Nebesna Kara with love,” it reads.


The wind is not just ‘wind’ – but a complicated arrangement of turbulent features that are influenced by the surrounding environment. Air turbulence is created by the landscape, but also by buildings, roads and wind turbines. In the ESTABLIS-UAS project, the German Aerospace Center (Deutsches Zentrum fur Luft- und Raumfahrt; DLR) is researching these flow effects. For this purpose, a swarm of drones ascends and measures these phenomena. The results can be used, for example, to improve the arrangement of … read more