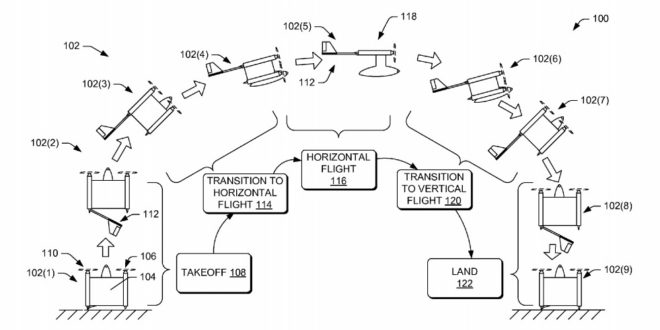 Amazon filed a bevy of drone-related patents this week, a total of four in all.

Most prominent among the patents is a patent for a drone with foldable wings. Other patents are for a system for determining the center of gravity for a payload that’s put on a delivery drone; a system to recharge a drone’s batteries while in flight (hurray for that); and an autonomous delivery transportation network.

The flexibility of being able to fold the wings would allow the drone to adjust for different takeoff and in-flight positions, and ultimately to make it more suitable for deliveries in tight spaces (we speculate—this has not been made explicit by Amazon). 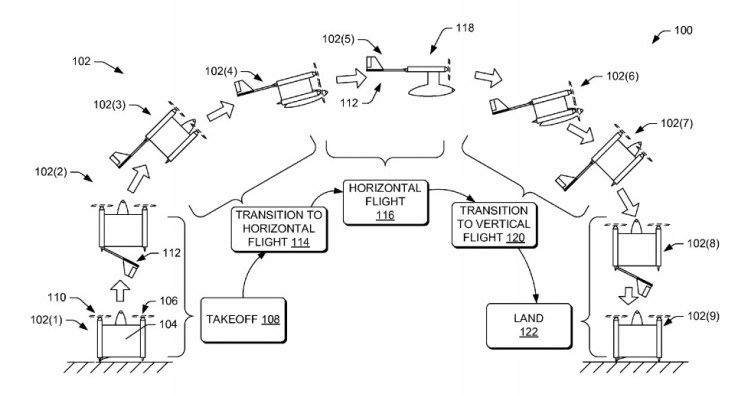 This diagram illustrates how the foldable-wing drone goes from vertical takeoff to horizontal flight.

For takeoff, the drone would be folded around to provide a stable base, which will allow the drone to takeoff vertically, with the rotors spinning in a horizontal plane. You don’t have to think too hard to imagine the benefits of this kind of takeoff for tight spaces, such as cities, where Amazon may hope to make deliveries via drone one day.

Once the drone is in the air the wings and tail fold back out to create a configuration like you see on an airplane. In this position the rotors spin in a vertical plane, as they do on an airplane, to propel the drone forward.

For landing, the wings and tail again fold up so that the drone can land vertically, just as it takes off.

In the USPTO (United States Patent and TradeMark Office) filing, Amazon compares the foldable-wing drone design to a Bell Boeing V-22 Osprey military aircraft. The Osprey also tilts its rotors from vertical to horizontal, depending on whether it’s taking off or in flight.

The Center of Gravity Patent

If the question of whether the patent for the foldable-wing drone will be used for deliveries is still a little open for debate, the center of gravity patent Amazon filed this week is not.

From the patent itself:

Clearly, the goal here is for the delivery, or “payload” as it’s called above, to be securely balanced within the delivery drone’s storage space so that it doesn’t shift during flight and cause the drone to become destabilized. 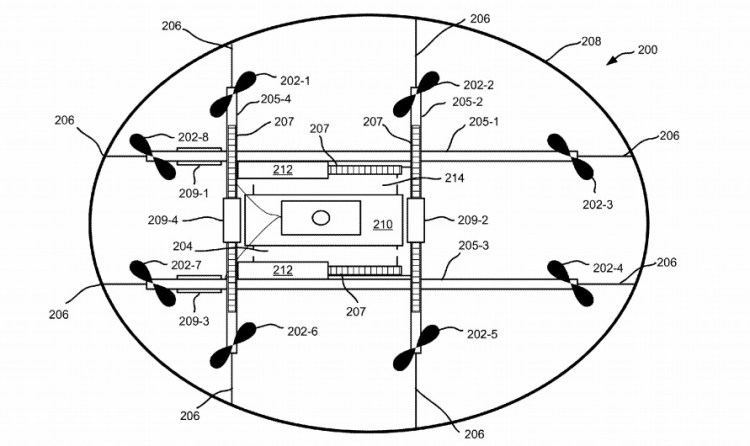 This diagram illustrates the way motorized arms on a drone (labeled as 205) could be extended or retracted to adjust for a payload’s center of gravity.

The patent filed this week for extending a drone’s battery life while in flight is pretty darn impressive. Essentially, the patent covers a few ways additional electricity could be generated while the drone is in flight.

One is using airflow to rotate one or more of the propellers so the associated propeller motors generate electricity, and the other is using kinetic energy related to the motion of flight to do the same thing.

Wind energy harnessed in flight—how cool is that!

The patent filed this week for establishing an autonomous delivery transportation network makes it possible for a network of delivery drones to function without direct human supervision, establishing “a central management system that directs the operation of a network of vehicles for delivering items.”

Kind of spooky (we just can’t help but think of SkyNet when we read things like this…) but also exciting at the same time.

Another recent patent filed by Amazon is for a Mega Drone, in which a group, or “flock,” of drones is put together to form one single, huge drone. The drones could detach to perform various tasks, and then regroup to save energy. As the patent reads, the mega drone could be used for transporting “virtually any size, weight, or quantity of items…”

Another benefit to the large size of the mega drone is that the linked drone array would be more visible, thereby allowing aircraft and air traffic controllers to spot them more easily. 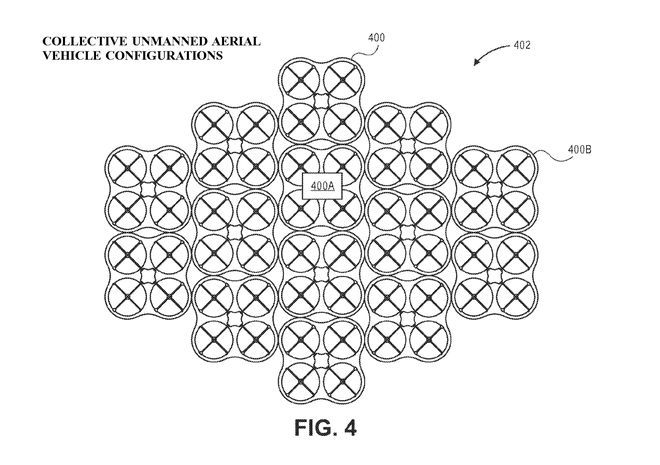 This diagram illustrates a group of linked drones, forming a “mega drone.”

Why All the Patents?

With this flurry of patents, you might think Amazon was getting ready to launch it’s AirPrime service, or gearing up to start moving quickly.

But we wouldn’t hold our breath. Most likely Amazon is covering its bases, making sure that the technology they need to make drone delivery a reality (and which is proprietary to them) doesn’t get snapped up elsewhere.

We see these patents as similar to what happens in the movie industry when a major studio buys the option to make a book into a movie. It doesn’t necessarily mean the movie will ever get made—it just means they don’t want anyone else to make it.

Share
Previous How DJI CrystalSky can help solve brightness issues on your …
Next Another Step Towards BVLOS Flight: Vigilant Completes Testin…

Get two drones for the price of one