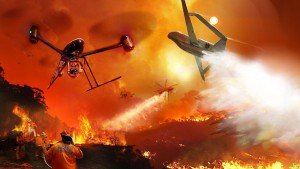 Last week, FAA officials told the Arizona Daily Star they would not prosecute an unidentified person who flew a drone over restricted airspace at the Bighorn wildfire scene in Arizona.

The agency wouldn’t say when the drone flight took place and refused to identify the name or gender of the pilot. However, firefighting officials temporarily suspended aerial operations in early June.

Unfortunately, a few “bad apple” drone pilots have disrupted other firefighting efforts over the past few years. In 2019, Arizona State Forestry officials spotted a drone over the Coldwater fire – a blaze that burned more than 6,000 acres of the Coconino National Forest. The sighting forced officials to temporarily ground a firefighting helicopter.

“I get that it’s hard (to prove). Some effort should be put into technology to identify the individuals that are invading this airspace at critical times,” Bighorn Fire expert Ben Wilder told the Star.

“Because it’s proven that if the Forest Service can’t get at their assets at that moment, then the fire gets an upper hand on them. It’s all so time sensitive.”

In a statement to the Star, FAA spokesperson Ian Gregor said:

“We conducted a thorough investigation into this incident. However, we were not able to conclusively determine that the suspected drone operator was the pilot. That said, we did counsel the drone pilot, both orally and in writing, about the importance of not flying drones near wildfires and observing any [flight restrictions] that are in place.”

On the positive side, drones have also been used by many agencies to help fight fires.