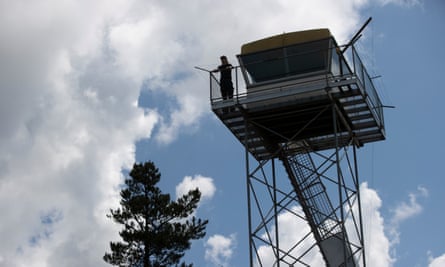 Perched in his fire tower high above the pine trees, Nick Dutton leans back and nods to the cascading hills and mountains behind him.

“I love being out here, just away from stuff,” he says. “I mean, you can’t really complain.”

Dutton, a fire tower operator, is sitting in his office, a tiny cabin propped high above the treetops by metal supports that sway with the wind.

His walls are littered with compass points and references, each a guide to the bush stretching in every direction along the eastern ACT-NSW border.

Every day, Dutton climbs into one of the ACT’s four towers, armed with binoculars, a radio, and his notebook, keeping a watchful eye for the faintest wisp of smoke rising in the distance.

The mind can easily deceive.

“With a little bit of experience up here, you get used to what is and what isn’t smoke,” he says.

“Some people when they first start find it hard to discern dust from smoke. But smoke does have its own characteristics and you do learn to pick that out.”

The days are long and quiet, narrated by birdsong from the surrounding pine forest and punctuated by hourly weather reports back to headquarters. Human encounters are typically limited to the odd buzzing of radio chatter and errant bushwalkers.

“You really have to love being alone to do this,” he says. “I think that’s the main trait, if you hate being by yourself and not talking to anyone, you won’t survive.”

Dutton’s is an increasingly rare occupation.

Towers like the one in Kowen Forest are the oldest continuing method of bushfire detection and monitoring, used in Australia since the early 1900s.

But their use is in decline.

In the US, where lonesome observers are known unofficially as “freaks on the peaks”, there were almost 10,000 staffed fire towers in the 1950s.

The shifts beg the question: is there still a place in modern firefighting for the observer in the fire tower?

In the 1980s, a remarkable breakthrough in fire detection was made.

US researchers noticed tiny white specks on a satellite image of the Persian Gulf captured by the National Oceanic and Atmospheric Administration’s polar orbiting environmental satellites.

Those white specks were the thermal signatures of gas flares from oilfields.

They were the first active fires ever recorded from space.

At first, the results were mixed. The systems were unable to differentiate a bushfire from oilfields.

But the technology was refined, the processing algorithms improved, and more specialised sensors and satellites were brought into the mix.

A sensor known as the moderate resolution imaging spectroradiometer, placed aboard Nasa’s Terra and Aqua satellites, is now able to capture red “hotspots”.

The accuracy, while not perfect, is now vastly improved and the technology continues to move at pace.

Earlier this year, a start-up named Fireball International, co-founded by University of Southern Queensland researcher Christopher Tylor said it had developed technology that fused satellite and tower sensors to detect a wildfire in California about 66 seconds after power lines fell and caused ignition.

Andrew Forrest’s Minderoo foundation is also proposing to use satellites, infrared sensors, and drones to identify and extinguish fires within an hour by 2025, through its $70m grant to the “Fire Shield” program.

The project is currently collaborating with fire towers like the one at Kowen Forest.

Companies like Ninox Robotics have proposed using a fleet of long-range drones equipped with advanced cameras accompanied by machine-learning algorithms to detect and monitor active fires.

Ninox believes the entire state of New South Wales can be monitored from 20 sites, using one active drone each.

The deployment of new technology would be most welcome in Australia.

The nation is now experiencing extreme bushfires at three times the rate it did a century ago and the climate crisis has brought new urgency to efforts to improve firefighting methods, including early detection.

Earlier this year, former commissioner of Fire and Rescue NSW, Greg Mullins, and 32 other former emergency services leaders told the bushfire royal commission that Australia should adopt “fast-attack strategies”, based on detection by remote cameras, satellite images and spotter flights.

Early detection should be complemented by mid-sized and purpose-built water bombers with the aim of extinguishing fires within 24 hours, they argued.

“Every big fire was once a small fire,” Mullins told the Guardian at the time. “It’s very much like a military operation with eyes in the sky, with your ground troops that are backed up with some artillery.”

Even before the release of its final report, the royal commission has urged federal, state, and territory governments work together to fast-track advances to spatial technology to help “detect ignitions and monitor accurately all fire edge intensity and progression automatically across the nation in near real time”, the royal commission said.

The benefits of real-time detection are obvious. Shorten the time between ignition and a fire crews’ first attack, and the prospects of containing a fire are greatly improved.

Not only does early detection save lives, but it has the potential to save the Australian economy billions of dollars.

Earlier this year, researchers at the Australian National University estimated an effective early detection system could save the economy an estimated $2.2bn a year over 30 years.

“In our view, the large sums that result from our conservative estimates make investments and improvements in early detection financially very viable,” the authors concluded.

Mark Crosweller, the former head of Emergency Management Australia and the National Resilience Taskforce, said that detection, while important, should not be the main focus for Australia.

Because at the end of the day, the human eye is going to be much better.

Crosweller said the common failure, seen in disaster after disaster, was one of situational awareness. Knowing where the fire is and where it’s going to go.

That failing was exposed with fatal consequences during the 2003 bushfires in Canberra, when a blaze burning in the mountains for more than a week ripped through the city without any proper warning to residents.

“They still have the same problem,” he said. “The industry is still fundamentally relying on human-centred intelligence, so human processing of data.”

The key advantage of more advanced sensory technology is its ability to feed into artificial intelligence and machine learning systems, which can then provide fast, accurate models to predict a fire’s behaviour.

“Sensory technology has the capacity to collect enormous amounts of data, but it needs to be machine analysed,” he said. “You still need a human to make a decision, but the machine can do the analysis work infinitely faster than a human can.”

“So I think it is the way of the future. And I think the future is now. I don’t think we have to wait any longer.”

The value of the human eye

Human observers, though, are far from obsolete.

In 2010, the CSIRO delivered a remarkable report on detection, comparing newer, automated camera systems with the skills of humans.

The study examined three systems: EYEfi, FireWatch, and Forest Watch, all of which used image analysis from sensors mounted on fixed towers.

The systems were tested for their ability to detect and locate fires, provide information to help with situational awareness, and integrate with emergency services agencies.

The humans won, hands down.

Six fires were lit intentionally for the study in forests near Tumut.

Tower observers saw all six. Firewatch reported one and Forest Watch reported zero. During the study, a further 250 private burns were conducted by neighbouring landholders.

“The camera systems reported many fires but comparison with tower observations in NSW and cross-referencing between camera reports in Victoria showed that a high proportion of private burns were not reported,” the study found.

The technology has come a long way since 2010.

But even still, Ailish Milner, a strategic planner with the ACT’s Rural Fire Service, believes human observers will have a key role to play in the near future.

Milner says humans provide a critical second source of intelligence when a heat source is detected using satellite or other technology.

“The towers are vital in being able to provide a second source of information,” she told the Guardian. “Being able to talk to the fire towers and say ‘we’ve got this heat source showing, can you see any smoke’ is that second source.”

Human observers bring their experience and extensive knowledge to contextualise and analyse what they’re observing.

Dutton recalls a recent example when a grassfire burnt through the Canberra suburb of Pialligo.

A colleague was in the tower and observed a strong wind change.

The observer knew the wind change would hit the fireground in Pialligo in a matter of minutes. Headquarters was alerted and crews on scene were informed.

“But for now, I think you can start implementing the tech but still have the operators to refine the technology.”

“Because at the end of the day, the human eye is going to be much better.”

Crosweller agrees that human observers are still valuable, particularly while the industry still grapples with how to use machine learning and artificial intelligence.

“The better we get at machine learning and artificial intelligence, the better we’ll get at working out where humans fit in those systems,” he says.

“That’s why I wouldn’t exclude the use of people in that context. But it will change.”