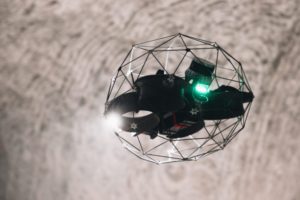 Flyability’s Elios 3 has successfully completed a 3D mapping operation of a radioactive waste storage vault following more than a year of preparation and research. The information obtained in the mapping project will prove crucial to planning the vault’s removal. This is thought to be the first time a drone has been deployed to enter a high-level radioactive waste storage vault.

The mission was conducted last November at the Idaho Nuclear Technology and Engineering Center at the Idaho National Laboratory Site by a team of roughly 50 people, who covered the top of the vault with a plastic tent to guarantee the mission took place indoors as per FAA regulations and Department of Energy (DOE) requirements, and who operated a crane to lift the vault’s lid and hatch. 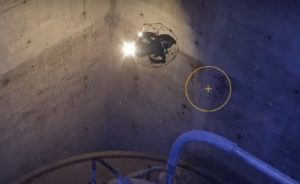 If the drone was lost during the mission, it would not be possible to retrieve it. However, the Elios 3 succeeded, and DOE contractor Idaho Environmental Coalition (IEC) was able to gather all the necessary LiDAR data to create a 3D map of the vault in just one 7-minute flight. An expert from 3D mapping software company GeoSLAM was in attendance to process the LiDAR data on GeoSLAM’s software, guaranteeing the model would meet the IEC’s needs.

“The Elios 3 was able to collect all the data we needed despite the high levels of radiation in the vault,” said IEC Principal Electrical Engineer Kevin Young. “Getting this data was crucial to the project safely moving forward. The mission was a huge success.” 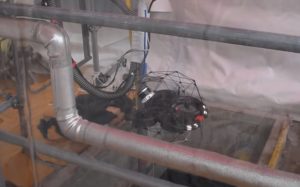 For the last two years, the IEC’s Calcine Retrieval Project had been seeking a solution to 3D map the vault’s interior. Granulated radioactive waste called calcine had originally been placed in 20-foot-tall stainless-steel bins inside the vault with no plans for removal, rendering any efforts to do so difficult.

IEC had devised a remote solution that involved drilling into the vault, robotically welding pipes onto the tops of the bins, and cutting into them with a plasma cutter. After the pipes were attached, they would pneumatically transfer the calcine. However, it would be impossible to know where to drill without detailed blueprints or a 3D map of the vault’s interior.

After selecting the Elios 3 as a solution, IEC tested the drone in a high-radiation environment, where it was exposed to up to 10,000 Roentgen per hour of radiation to ensure it would remain operable within the vault. In addition, the IEC built a life-sized replica of the vault for training pilots in an environment simulating the actual location in which they were to operate. 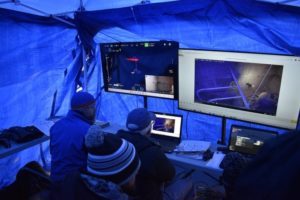 “After over a year of preparation it has been incredibly exciting to see this project conclude successfully,” says Alexandre Meldem, Managing Director of Flyability North America. “We are always looking for ways Flyability’s technology can be leveraged to gather data that would be hard or even impossible to collect otherwise. This mission is a prime example of the benefits the Elios 3 can provide for 3D mapping confined spaces to support inspections and project planning.”

Following two successful LiDAR data collection flights, IEC conducted a third experimental flight with a dosimeter attached to the drone, increasing its weight. After entering the vault the drone was unable to produce enough lift to remain aloft, descending atop a storage bin and becoming caught on a piece of angle iron, with all attempts at freeing it failing. Before its battery died, the drone transmitted a maximum radiation reading of 7 Gy/h (700 rad/h) from atop the bin. A comprehensive analysis by ICP subject matter experts found that the drone could be safely left on top of the storage bin without issue.

After the successful 3D mapping, the operation’s next step is to plan for the removal of the calcine, which the IEC intends to start this year. The site features a total of six vaults storing a collective 4,400 cubic meters of calcine.