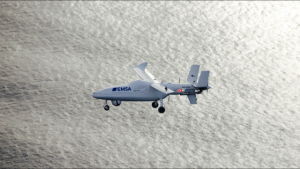 Drones for the Environment: Tekever to Support EU Coastguard…

The European Maritime Safety Agency (EMSA) has chosen the TEKEVER AR5 to “create the first European maritime surveillance and environmental monitoring system based on drones.”  TEKEVER introduced the 2-year, 77 million Euro (about $85 million) contracts throughout the Paris Air Show yesterday.  The contracts are half of a bigger program to present the EU Coastguard and environmental safety actions with drone expertise.

Tekever collaborated with French-based maritime surveillance specialists CLS on the providing.  CLS makes a speciality of gathering maritime knowledge and offering intelligence; they be part of Tekever to present an end-to-end answer.  The TEKEVER AR5 UAS is a system “designed for long-range maritime surveillance and pollution monitoring missions, equipped with a comprehensive set of sensors in a fully integrated payload.”

“Following a request to EMSA by a EU Member State, our consortium will provide a complete, turnkey, fully operational service for conducting maritime surveillance and environmental monitoring missions. This revolutionary service provided by EMSA is having a profound impact on the market and raising a very high interest in many countries throughout Europe”, mentioned Ricardo Mendes, General Manager of TEKEVER Autonomous Systems.

“CLS has been providing satellite based services to EMSA for many years, and we now have the opportunity to complement these services with a drone-based capability. We’ll provide the backend for the service, and deploy expert staff to support multiple types of missions, including pollution detection – an area in which CLS has over 30 years of experience”, mentioned Gaetan Fabritius, Head of Maritime Surveillance at CLS.

Operations are anticipated to start over the subsequent couple of months.

“The UAS operations can be performed in any sea area surrounding the EU or an EFTA country, or even be extended outside EU adjacent seas upon common agreement and on request by the European Commission,” says the announcement. “With this new capability, EMSA will complement EU Member State action in the fields of oil spill detection, maritime surveillance and the monitoring of air emissions from ships.”

Miriam McNabb is the CEO of JobForDrones, an expert drone companies market, and a fascinated observer of the rising drone business and the regulatory surroundings for drones. She writes for DRONELIFE on present information, monetary traits, and FAA laws. Miriam has a level from the University of Chicago and over 20 years of expertise in excessive tech gross sales and advertising and marketing for new applied sciences.
Email Miriam
TWITTER:@spaldingbarker
Share
Previous Aerialtronics Announces PENSAR, Dual Spectrum Computer Visio…
Next The Top 5 European Drone Companies to Watch