Drones can be crucial for search and rescue teams. So why do…

Confusing regulations and high costs are keeping some Canadian search and rescue organizations from using drones, even though the devices are described as one of the “greatest tools” in a first responder’s tool kit.

In parts of the country, search and rescue drones use infrared cameras to spot people missing in the woods, map search areas and keep ground crews out of dangerous spots. One group of paramedics in Ontario even uses them to quickly deliver life-saving defibrillators and medicine.

But despite the benefits, regulatory questions and the potential costs have kept some search and rescue groups in Nova Scotia, New Brunswick, P.E.I. and Yellowknife from adopting the technology.

“It’s a complicated issue because of safety issues and also because of the licensing, so it’s a very involved process,” said Sherry Veinot, president of Nova Scotia Ground Search and Rescue Association.

“It’s not as easy as going out and buying a drone and we’re going to use it. There’s a lot of factors to consider. You have to look at, you know, the safety of the people that are on the ground also.”

Veinot also has questions about liability and privacy while using drones, which have all played a part in the organization’s decision not to use the machines.

She’s not the only one confused by what’s required to get a search and rescue drone in the air, both under the current rules and under new federal regulations that come into force next month dictating who can operate one, where it can fly and what it can carry.

“Regulations was obviously a very confusing thing for some of them,” said Philip Reece, a member of Flyy, an organization that represents professional users and provides training to companies and first responders that use drones.

“Since Transport Canada started to talk about the new regulations coming into force, and now as in fact they come into force on June 1st, there is a bit of confusion there.” Paramedics in Ontario’s Renfrew County have equipped their drones to drop off defibrillators. (Ashley Burke/CBC)

Transport Canada is in the process of streamlining its regulations to make its processes easier to understand. Under the new rules a search and rescue organization needs to register its drone, pass an exam and pass an in-person flight review. The flight review is like a driving test for a car and is used to assess a pilot’s ability to operate a drone.

Once that’s done a pilot certificate for advanced operations is issued.

“The new rules are way simpler than, than the existing rules if I can put it that way,” said Felix Meunier, the director of the remotely piloted aircraft systems task force with Transport Canada.

“If any first responders have any questions with respect to the interpretation of the rules, we’re very happy to either meet with them or answer any questions they may have.” 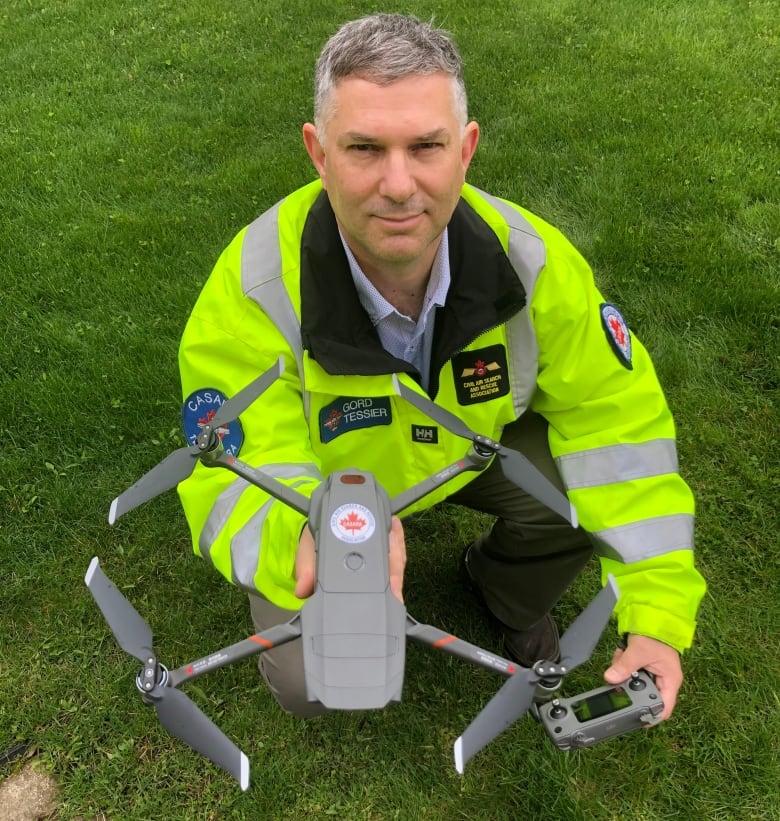 Gord Tessier is director of research and development with the Civil Air Search and Rescue Association of Ontario. (Submitted by Jennifer Tessier)

Transport Canada even has an inspector dedicated to helping first responder organizations. Meunier said he’s seen drones in action and can see how useful they can be to search and rescue groups.

Gord Tessier, the director of research and development with the Civil Air Search and Rescue Association of Ontario, said drones “cut search and rescue times down dramatically.”

“Time is of the utmost essence. If that person is bleeding out in the bush, or over on the lake, or their drowning or whatever the scenario is, we need to get there as quickly as possible and drones will do that,” he said.

His organization works with the Department of National Defence providing volunteers who work as pilots, navigators and spotters to help find missing people and aircraft. Infrared cameras allow drone pilots to fly their machines at night. Ground searches and helicopter searches are usually shut down once the sun sets. (Submitted by Paul French)

While drones prove useful, they are not cheap.

The sheer cost of buying a drone suitable for search and rescue is turning off some groups, especially when the RCMP in many areas have ones that can be brought in to help during searches.

“They are expensive to buy, there are certainly costs associated with licensing and there’s the ongoing commitment to training and using it,” said Tom Girrior, the training director with Yellowknife search and rescue. “In our case we looked at it and just felt the costs were too high for us.”

Drones sell for a wide range of prices, but generally those that search and rescue organizations need have to be more robust and able to fly in bad weather, making them more costly. The drone used by Rovers Ground Search and Rescue based just outside St. John’s. (Submitted by Paul French)

Rovers Ground Search and Rescue in Newfoundland and Labrador spent $70,000 for its drone system. That system contains numerous components including the drone, extra batteries and an infrared camera.

Paul French, one of the drone’s pilots, said after the search for a vulnerable person last year the team decided they needed a drone. At the time they had searchers on the ground and helicopters in the air, but weren’t having much luck finding the man.

“The helicopters actually scared the individual and drove him further into the woods. Had we had the drone, you know, it would have been a lot more quiet and he actually wouldn’t have even known it was in the air.”

French said had they been able to use the infrared camera on a drone they would have been able to lock onto the man’s body heat and find him much faster. Michael Nolan is director of emergency services and chief paramedic for the County of Renfrew. (Ashley Burke/CBC News)

However, one of the most cutting-edge drone operations in Canada is being run out of Renfrew County in Ontario. The county’s paramedics have a team of six drones that can dispense medicines and defibrillators to people in need.

The paramedics’ drones are sometimes even used for search and rescue operations where they’re equipped with flotation devices they can drop to people who run into trouble on the water.

“This past winter we had a number of circumstances where we had reports of people having gone through the ice,” said Michael Nolan, the director of emergency services and chief paramedic for the County of Renfrew. “Instead of sending responders out onto what is now known as thin ice, we can simply send the drone out with a flotation device.” The Royal Canadian Air Force is also looking at getting its own long-range drones. The main purpose is surveillance and reconnaissance, with a secondary role in search and rescue.

The drones could also be equipped with a “Survival Kit Air-Droppable (SKAD) containing survival gear to persons on the ground or at sea,” according to Maj. Scott Spurr, a spokesperson for the air force.

But Spurr said exactly what the military drones will be capable of is still up in the air since the plan to purchase them is still in its infancy. The drones aren’t even expected to be delivered to the air force until 2024 or 2025 and won’t become fully operational until at least 2029 or 2030. Earlier this month paramedics in Renfrew County were using a drone to deliver medicine and other supplies to residents cut off by flooded roads. (County of Renfrew)

While the country’s military drones may still be on the drawing board, Renfrew County’s paramedics regularly use their drones at least once a week.

Nolan said they save lives.

“Without a doubt it is one of the greatest tools that I’ve seen in my almost 30 years as a paramedic.”