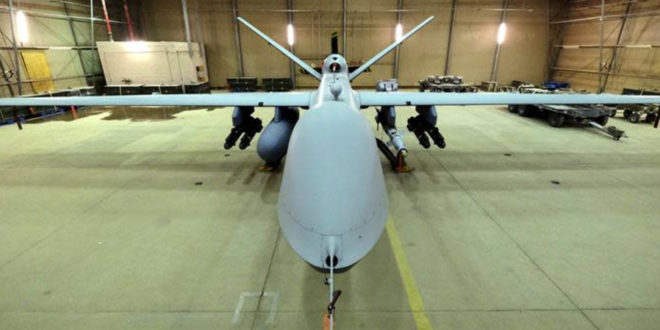 
As you can imagine, more people are reading The Jerusalem Post than ever before.
Nevertheless, traditional business models are no longer sustainable and high-quality publications,
like ours, are being forced to look for new ways to keep going. Unlike many other news organizations,
we have not put up a paywall. We want to keep our journalism open
and accessible and be able to keep providing you with news
and analysis from the frontlines of Israel, the Middle East and the Jewish World.

As one of our loyal readers, we ask you to be our partner.

For $5 a month you will receive access to the following:

Help us grow and continue telling Israel’s story to the world.

UPGRADE YOUR JPOST EXPERIENCE FOR 5$ PER MONTH


Two US MQ-9 Reaper drones were involved in incidents in Yemen and the Gulf of Oman that raises questions about the extensive use of the drones and also how Iran and its allies are targeting them.

Fox News and CNN revealed that a US drone was targeted by an Iranian missile during the June 13 tanker incident and that a drone was downed over Yemen by Iranian-backed Houthis. Houthi drones also have targeted Saudi Arabia numerous times over the last week.

In the last weeks the Iranian-backed Houthi rebels have increased their drone attacks on Saudi Arabia. This is part of an ongoing war that stretches back to the Saudi-led intervention in Yemen in 2015 when the Houthis appeared to threaten Aden and the Bab el-Mandeb straits. The Houthis have sophisticated technology, including ballistic missiles that have been fired at Riyadh, anti-ship missiles that have harassed warships in the Red Sea, and also drones. In the last week three drone attacks have been reported on Saudi Arabia’s Abha city.

However new details show that two US MQ-9 Reaper drones were involved in incidents in Yemen and the Gulf of Oman that paint a new picture of the extent of US drone use and involvement. The story in Yemen is murky. Houthis claimed to have shot down a US Reaper drone on June 6. Details were released over the last few days but the US largely ignored this story. US drones have been targeted before over Yemen. One was shot down in 2017.

Barbara Starr at CNN reported on Friday that a Reaper was shot down in the Red Sea by Iranian backed Houthis.

In addition a second US drone was involved in the tanker incident on June 13 when the US says two tankers were attacked off the coast of Iran. “A Us drone tracked Iranian boats closing in on the two tankers prior to attack Thursday. Iran spotted the MQ-9 and launched a SAM missile but missed,” Starr reported.

FoxNews reported that the drone arrived on the scene after the tanker Front Altair sent a distress call. That would have been in the morning around 6:20am. An official told Fox News that the MQ-9 Reaper arrived within 8 minutes of the 6:12am distress call. At 6:45 an SA-7 missile was fired at the drone from Iran.

That means Iranian air defenses fired at a US drone that was apparently over international waters off the coast of Iran. Iran may have learned how to confront US drones from their Houthi allies.

The US did not initially report either of the details about the drones. That the Houthis shot down a US drone appears to be important news. But like so much else in US operations in around eighty countries in the world against terrorist and extremist groups, much goes on in the shadows.

A drone war is occurring over Yemen and also in the region between Yemen, Saudi Arabia and the Gulf of Oman, testing both US weapon systems and the weapon systems that Iran and its allies and proxies have at their disposal. The use of drones over Yemen has gone on for many years. For instance Anwar al-Awlaki, an extremist and eventual Al-Qaeda supporter was killed in 2011. One of the first known drone strikes in Yemen was carried out by an MQ-1 Predator drone in 2002. These have been flying since the mid-1990s, while the Reaper has been in service since the mid-2000s. Of more recent importance is the Houthi rebel use of drones. With both sides now using them, and with anti-drone technology increasing, tensions in the gulf are increasingly a contest between unmanned vehicles, and the missiles that target them.