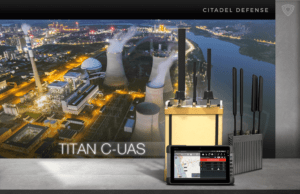 Citadel Defense Teams Up with Syzygy to Develop Advanced Cou…

Counter-drone provider Citadel Defense is teaming up with Syzygy Integration to develop a custom solution for the U.S. Department of Defense and other federal government agencies.

The solution—known as a Tactical Assault Kit (TAK)—informs security teams of unwanted drone activity and equips authorized operators to neutralize threats within their airspace.

“Citadel is addressing a critical operational need for cost-effective, rapidly deployable, and operator-portable C-UAS solutions that work across the entire defense chain, which includes detecting the drone, classifying it, locating it and safely neutralizing it with a low-collateral effector.  The solution is rolling out to military and federal customers throughout 2021.”

“We are excited to have Titan fully integrated into the SNAP ecosystem.  This capability enables real-time C-UAS intelligence and mitigation of unwanted drone activity from anywhere in the world.  This capability helps first responders and government agents respond quickly and more safely,” said Wesley Mitchell, President of Syzygy.

Last year, Citadel launched a new AI and machine-learning software release for the Titan system. Company officials say the software-hardware combo represents an evolution of the tech after several months of “successful deployments across multiple combatant commands and hundreds of unique environments.”

The counter-drone system leverages the world’s largest dataset adapted for AI-based drone detection. Citadel deploys the system to a global client base, offering protection from rogue drone missions such as recent attacks in Armenia and the Middle East.

When paired with the Titan system, the counter-drone solution can protect a large military base or airfield via a single interface for around-the-clock coverage.

Share
Previous MaGIC-AirAsia partnership: How drones can impact the future …
Next UTM in Singapore: Working Prototype