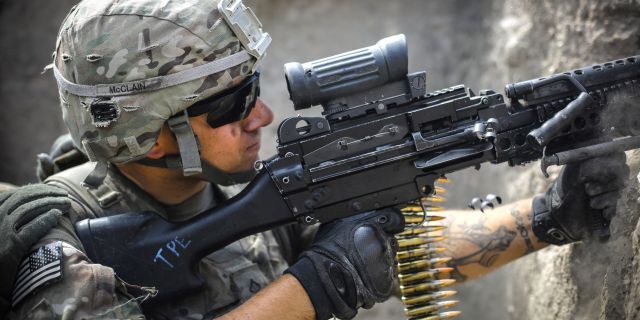 That is the fundamental question now being taken up by an elite unit of scientists with Army Futures Command, a task force of sorts looking at global technological trends, areas of basic research and changing global conditions as indicators of what kinds of unanticipated warfare weapons, tactics and scenarios will emerge in coming decades.

“There is a tech forecasting cell at the Army Research Lab … not only from a U.S. Tech base but worldwide which looks at where the investments] are being made and where we are going to be in technology in 10 to 15 years,” Gen. John Murray, Commanding General of Army Futures Command, told The National Interest in an interview several months ago.

Weapons technology, while of course quite fundamental to future war, is only part of the equation, according to Murray, who explains that new technologies, systems and circumstances will reshape tactics, formations and maneuver strategies in unexpected ways.

A US soldier from 2-12 Infantry Regiment out of Colorado Springs fires a machine gun at insurgent positions during a firefight on June 22, 2012 in the Pech Valley, Afghanistan – file photo.
(Photo by John Cantlie/Getty Images)

Some of the expected areas of weapons and technical progress are likely to spur new ones, such as small, smart sniper or rifle rounds with built-in sensors able to steer their own way to moving targets in war. Miniaturization technologies, for instance, represent a progressive technical trajectory such as extremely small sensors, radar systems and guidance mechanisms could conceivably be built into small arms or tiny drones.

Thousands of armed, networked and AI-enabled forward-fighting robots, while operated at safe distances by humans, maybe nearer term than expected given the pace of technical change.

While Murray did not elaborate on too many specifics related to this tech cell, he did address a number of technology trends at great length, often in the context of what a future warfare environment might look like.

Therefore, the assessments look at demographic trends as well, such as rapid urbanization, ubiquitous information sharing and much faster air travel. For instance, one senior Air Force scientist told me as far back as several years ago, that hypersonic drones are expected by 2030 and even recoverable hypersonic drones by 2040.

Tactically speaking, what might this mean? It means that a surveillance or attack mission could find and attack targets continents away, in minutes. Such a technical phenomenon could enable nearly instantaneous attacks and surveillance across the globe, radically changing the pace and character of war.

Perhaps all of these things may help explain why Murray told me that he expects a “hyperactive battlefield in the future.”