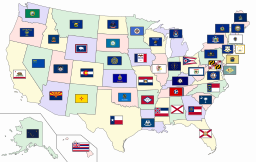 An Open Letter to State and Local Policy Makers

By SiBr4 and respective authors of base recordsdata [CC BY-SA 3.0]

Vic Moss is an award-winning skilled photographer.  He’s additionally a licensed and skilled drone operator, educating aerial pictures at The DroneU, and he’s an lively administrator of the UAV Legal News and Discussion group on Facebook.  He’s an clever, cheap man to converse with  – and he’s develop into a passionate advocate for clever, cheap drone regs.

Moss has revealed “An Open Letter to State and Local Policy Makers Considering Drone Laws” explaining why native drone legal guidelines come up towards federal preemption, and require very cautious consideration.  And he invitations any drone operator talking with native regulators to make use of the letter to assist.  “There are a lot of politicians who want to work within the law,” says Moss.  “I think most simply don’t understand the federal framework.”

State and native laws trigger a giant drawback for drone operators, notably these professionals making each effort to fly legally.  It’s an issue Moss, who relies out of Colorado however operates all around the nation, is all too conversant in.  If he operated a drone from the place he lives, he explains, he might cowl 2 cities and some unincorporated county land.  “I could have to fly under 3 sets of laws in one flight,” he factors out. “What laws am I supposed to follow?  How am I supposed to follow the laws if I don’t even know where to find them?”

Finding the legal guidelines is a significant drawback for drone operators, coping with a possible triple menace from federal, state, and metropolis governments.  Add the complexity of the entire “without permission” clauses – as in, you possibly can’t fly close to native important infrastructure “without permission” – and business flight can develop into a logistical nightmare.  “Who grants permission?” asks Moss, mentioning that many laws could get handed with out the processes required to make them work. “How do I get that?  It’s just not very clear.”

But regardless of the business’s frustration and the FAA’s warnings that they’re the one company liable for regulating the airspace, native laws maintain developing: at a disturbingly rising tempo.  “It seems like this year, they’ve come out of the woodwork,” says Moss.

Moss encourages native regulators to converse to native drone operators, each business and leisure; and to guarantee that they’ve the entire details earlier than them earlier than they determine to move legal guidelines that will have unintended penalties.

“It is in the best interest of your state or town for you to educate not only yourselves about who has authority over the NAS, but your constituency as well,” says Moss’ letter. “Not only will it save time and resources of your municipality, you won’t have to sit in front of an angry group of constituents asking why their taxes went up in order to pay for a federal lawsuit.”