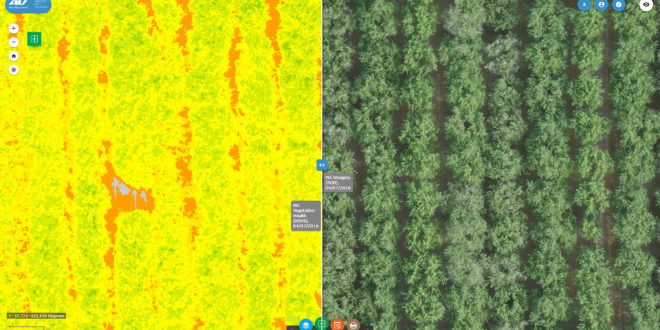 AeroVironment Drone May Save California Almonds

However, a California-based drone company is teaming up with an academic research team to give growers a powerful new tool for a healthier harvest.

The project comes at a time when almond growers face criticism due to the industry’s higher water usage amid the state’s drought.

“As California nears its sixth year of serious drought the state’s thirstiest crops are under increased scrutiny, and almonds have been criticized for their intensive water footprint. Improved crop management is a major goal for all growers, including almond producers,” San Gabriel Valley Tribune reported earlier this year.

At the same time, almonds comprise the California’s second largest agricultural commodity, according to the Almond Board of California – a commodity valued at $5.33 billion in 2015 and accounting for approximately 14 percent of California’s total irrigated farmland.

“Improved crop management is a major goal for all growers, including almond producers,” Jon Self, vice president, AeroVironment Commercial Information Solutions, said in a press release.

AeroVironment will unleash the 10-foot-span, fixed-wing Puma drone to survey trees, gathering imagery with a 24 megapixel, photogrammetric camera and a six-channel, multispectral sensor to capture data.

From there, the company’s cloud-based software platform takes over, analyzing the data to monitor stress and hydration levels, identifying potential trouble spots that could be missed by a ground team.

“Working closely with the plant science experts [at FSU], we look forward to developing a reliable and effective means of correlating multispectral data with almond tree hydration data to provide growers with better insight so they can proceed with certainty,” Self said.

For AeroVironment, the research program is just another example of how military drones can be re-tasked for civilian use.  In June, AeroVironment made domestic-drone history when the Puma became the first domestic model to garner FAA approval for commercial use. The agency gave AeroVironment “permission to use a Puma drone to survey pipelines, roads and equipment at Prudhoe Bay in Alaska.”

Share
Previous My Drone Crashed – What Now?!
Next UK Government Calls for Comments on Drone Proposals