It’s kind of hard to get in touch with Colin Guinn.  That’s because he’s doing a return appearance on Season 31 of The Amazing Race – a reality TV show where teams race to complete the 25,000 mile journey around the world.  He and his life partner Christie Woods first competed on Season 5 – and now they’ve returned as some of “the most memorable and competitive players” from the show’s long run.

While his status as a reality TV star makes him a household name around the world (and ups his cool factor through the roof), Colin Guinn is also famous in the drone industry, having served as Chief Revenue Officer at 3D Robotics and as co-founder and and CEO of DJI North America. Featured in publications like 60 Minutes, TechCrunch, and Fast Company; Colin is a world-renowned expert on robots and technology.  A serial entrepreneur, he founded Austin startup Hangar, a partner-integrated platform providing automated end-to-end drone services.  Most recently, Colin approached the team at Sunflower Labs, a provider of autonomous home security drones, and has now become one of the startup’s board members.

DRONELIFE was able to steal some rare time with Colin to hear his position on the future of the commercial drone industry, drone regulations, and why Sunflower’s autonomous security drones put them in the position to become the DJI of their space.

Colin has a unique take on the progress of the commercial drone industry.  While he’s a believer – and a stakeholder – in the industry’s potential, he doesn’t believe that regulations are what’s preventing the space from taking off.  This perspective is largely formed from his time at DJI, where Guinn says that the company’s first efforts in the commercial drone industry demonstrated that ease of use and an understandable process were the key to adoption.

“People tend to forget, but DJI’s first product ever was a $12,000 autopilot, attached to a $20,000 drone,” says Guinn. “DJI, in their DNA, is a very high grade engineering company.  In Frank’s [DJI Founder Frank Wang] DNA is a real love for flight – he wants people to experience that, and that’s where the consumer drones come from.”

Guinn explains that the company quickly realized that the technical difficulty of flying the drone was a significant barrier to entry: so to allow customers to experience what the drone could do more easily, they developed a smaller, easier to fly “training drone” – the precursor of the Phantom 1.  The rest, as they say, was history.

It’s All About the Workflow

“It makes perfect sense why the consumer drones took off, and then the early adopter of the commercial industry – video production – followed,” explains Guinn.  “We didn’t have to invent a new work flow for that, we just had to invent a flying camera.”  Drone video was a no-brainer for the production industry, Guinn says, because the workflow was already there – production companies were already used to getting the video from a camera into their editing software; using a drone didn’t represent any change to that process.

It got harder, however, in industries like construction and mining – where the data was incredibly useful, but represented a totally new process.  Guinn agrees with the commercial drone industry’s mantra that it’s not the drone, it’s the data – but says that it’s still too hard for someone not interested in becoming a drone pilot or engineer to access that data.  “If we’re honest with ourselves, we have to realize that its not about the sensor, its not about the drone, it’s about what the workflow is for the person who needs their important data,”  he says.

Taking the Human Out of the Equation

“You can’t go into an existing enterprise and say, “Stop what you are doing for a few months and learn drones!”  The workflows today are still completely broken – you have to be a pretty hard core geek or engineer to go through the entire process, it’s just not a push button solution.  And that’s what industry needs.”

Guinn points out that development of truly autonomous systems is still ongoing – and the regulations aren’t really behind.  “Beyond Visual Line of Sight (BVLOS) shouldn’t really mean I can fly beyond where I can see – it should mean that I don’t have to be there looking at it,” he points out. “Where we will see a massive change is when we can get the human out of the equation – when things can happen fully autonomously.  That’s when every single construction site, every farm, every mine will have a drone on site. ”

Recently, Colin reached out to Alex Pachikov, CEO of Sunflower Labs, at CES.  Sunflower Labs, says Colin, has developed a product he’s thought about for a long time – a home or light industrial security solution using drones.  The product will be launched next year, but the beta test is cost effective, flexible, and stunningly effective. 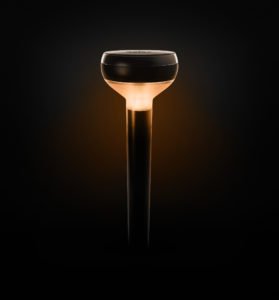 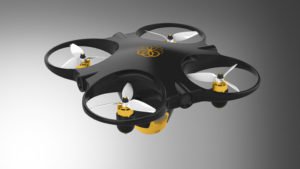 Small, sophisticated sensors – or Sunflowers – are positioned strategically around the property, wherever the owner wants to know what’s happening.  They look like small garden lights, but the they can identify people, animals or cars coming on to the property – and can distinguish between a human intruder or an animal by the vibration of the human gait.  When the sunflower detects an intruder, it determines whether the event meets the customer – defined threshold for notification: then it launches the drone – the  Bee – and streams data to the homeowner, the homeowner’s security firm, or wherever the customer chooses.

“I sought out Sunflower Labs, they didn’t come to me – and it wasn’t because I was so excited about protecting my house with a drone,” says Guinn. “It’s because I drew so many parallels between what Sunflower Labs is doing and what DJI was doing in the beginning.”

Guinn describes a reality of manufacturing, which he calls “the bullshit tolerance threshold”: “It’s how much BS people are willing to put up with to figure out how to extract value from a product,” he explains.  “Interestingly, it’s an inverse curve – if you are selling something for $100,000, customers expect to invest time in it.  But if you are selling an $800 drone, people expect it to be easy to use and perfect right out of the box.”

“Once you start making lower cost systems, the more of them you make – and any bugs or issues come to surface immediately.  The reason DJI is so far ahead of any other drone company on the planet is volume: if they have a small bug, they will have 1,000 users who will report it on day 1, and it gets fixed.  Immediately.”

That’s where Sunflower Labs also holds an advantage.  The leadership team at Sunflower Labs comes from leading consumer app company Evernote – and that, says Guinn, combined with a low price point and a consumer market, positions the company for exponential growth.  “Sunflower Labs is being held to a consumer grade of engineering  – they’ll be getting thousands and thousands of flight hours,” he says. “This team is unbelievably smart, and they really understand their path to market: there are thousands of people that will buy these units.”

And while they do that, says Guinn, they will be figuring out totally autonomous flight.  “They are really on to something special – and it totally ties into how the drone industry is progressing.  We’ve gone from 0-1 and proved the value of drones: but to go from 1 to 100 will take it making it easier and more automated and more seamless.”

“If anything can be learned about how DJI grew into the professional market, it was through making thousands and thousands of cool consumer drones,” says Guinn.  “I am looking through that same lens when you look at Sunflower Labs. I love how they’re positioned and I love where they’re sitting.  They aren’t selling a cool drone, they’re competing against fixed security cameras with expensive installation and operating costs.  They’re competing on a value solution of property awareness.”

The commercial industry will grow exponentially when that element of auonomous flight -and workflows – have been perfected. “It has to be a clean adoption cycle and a clean user experience,” says Guinn.

“We’re getting there, it’s going to happen.” 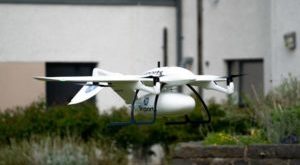 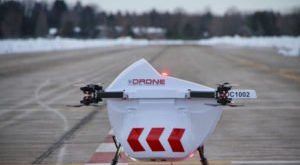