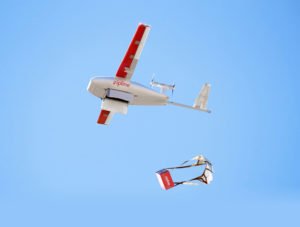 Zipline operates the world’s largest – and first broadly implemented – drone delivery network.  Zipline has been operating medical delivery services in Rwanda and around the world.  They’ve developed their innovative drone delivery system to enable the safe and reliable delivery of medical supplies at scale.

Zipline’s experience is a major benefit to Walmart drone delivery programs. “To date, they’ve safely delivered more than 200,000 critical medical products to thousands of health facilities serving more than 20 million people across multiple countries,” says the announcement.  “This uniquely positions them for national-scale operations across the United States.”

Zipline will operate from a Walmart store and can service a 50-mile radius, which is about the size of the state of Connecticut. And, not only does their launch and release system allow for quick on-demand delivery in under an hour, but it also eliminates carbon emissions, which lines up perfectly with our sustainability goals. The operation will likely begin early next year, and, if successful, we’ll look to expand.

The announcement follows recent news that Walmart drone delivery was teaming up with drone delivery company Flytrex to implement a trial delivery project in Fayetteville, NC.

In other significant drone delivery news, Amazon’s PrimeAir delivery drones won certification from the FAA in August.   As the two largest retailers in the U.S., Walmart and Amazon are major competitors – and major influencers on U.S. consumers.  With both companies demonstrating a commitment to consumer drone delivery, a future when drones will stop at your doorstep as often as delivery vans seems to get closer.

Share
Previous Skydio X2D is the Ultimate Tool for the Armed Forces
Next Citadel Defense Gets $12.2M Contract for Anti-Drone Tech