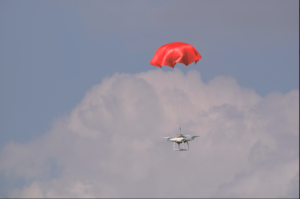 Is Flight Over People the Tipping Point for the Commercial D…

In The Tipping Point: How Little Things Can Make a Big Difference, author Malcolm Gladwell defines the tipping point as “the moment of critical mass, the threshold, the boiling point”.  It’s hard to say exactly when the tipping point for the commercial drone industry will be, or what in particular might cause it – but for Avi Lozowick, Director of Policy at drone safety system company ParaZero, regulations to allow flight over people may be the push the industry needs.

“We’re kind of at an inflection point – flight over people has been limiting the industry to this point,” says Lozowick. “In order for the drone industry to get to where they need to go, we have to have flight in cities.”

He may be right. Here in the U.S., the U.S. Bureau of the Census says that over 60% of the U.S. population lives in cities – and it’s over 70% in cities in the midwest and western parts of the countries.  As part of the UAS Integration Pilot Program (IPP), Lozowick’s company ParaZero has been working on the problem.  With partners Botlink and the North Dakota Department of Transportation (NDDTT), ParaZero demonstrated flight over people succesfully last year.  By using the same safety protocol, says Lozowick, “Now we’re trying to replicate that success with other operators.   We are working with a handful of operators from different verticals – and we’re hoping that those waivers will be approved.”

“That will help prove two things,” Lozowick comments. “First, that the IPP projects are replicable.  And second, that the ASTM standards that we invested heavily in can be relied upon.  That would be a big win.”

The ASTM standards that he mentions (ASTM F3322-18) was released in September 2018 and defines the requirements for the design, manufacturing and testing of sUAS parachute systems.  With partners including DJI, ParaZero worked for over a year and a half with the FAA to establish the ASTM framework.  ParaZero’s SafeAir System is available for several DJI drones; it’s a lightweight, sophisticated safety system designed to deploy a parachute and control descent when a flight anomaly is detected.

Before the drone industry can expand into urban operations that include flight over people, however, regulations have to change.  That’s where the recent FAA Notice of Proposed Rule Making (NPRM) comes into focus, and Lozowick points out one major problem in the proposal for flight over people.  “Operation over moving vehicles was excluded from the NPRM,” he says.  “That’s one of the things that we see has to change.”

“There are two issues from the FAA’s perspective – one we can help fix, but the second is more problematic,” says Lozowick.  “The first is impact energy.  There is research that needs to be done on that, but that’s just science and testing – we can do that.”

“The second is the issue of distracted driving.  Regulators are afraid of the ripple effect of a car being distracted by a drone overhead – and that’s hard for the drone industry to address.”  (For more details, see ParaZero’s comments to the FAA.)

Distracted driving, whether from texting, a squirrel, or a shiny drone, is a tough problem to fix: but in order for drone flight in cities to reach full potential, flight over cars will have to become legal.  When commercial drone applications that take full advantage of the speed and efficiency that “as the crow flies” flight offers, and can be used wherever needed, the tipping point for the drone industry might finally be reached.

Share
Previous Drone and Robotics Symposium Coming to Monterey June 21
Next Cape: Aerial Telepresence Changes the Definitions of Pilot a…