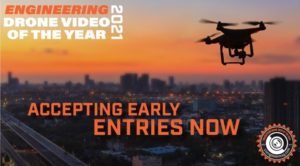 Think your video soars above all the rest when it comes to engineering videos? Civil + Structural Engineer Media this week announced an open call for submissions to the 2021 Engineering Drone Video of the Year (EDVY) Competition through April 30, 2021.

Videos must be original, comprised of drone video footage gathered with a drone and should feature an engineering or construction project.  All submissions should be between 1-5 minutes in length.  There is no fee to enter.

Three finalists will be selected by C+S readers between May 3 and May 21 via online voting.

Finalists will be featured in Civil+Structural Engineer Magazine.  Additional prizes for the winning video to be announced soon.

Civil+Structural Engineer Media publishes business news and project information in the AEC industry.  Each month the magazine features peer-contributed articles covering engineering and construction projects, as well as cutting-edge software tools and interviews with successful engineers and thought leaders in the industry.

The FirePoint C3 Challenge is a competition in which the teams vie for a “final four” phase. The four winning teams collaborate to design and fabricate an integrated drone prototype to be presented to the U.S. Army next year.

Last year, SkyPixel and DJI launched a drone video short film contest with $50,000 up for grabs.