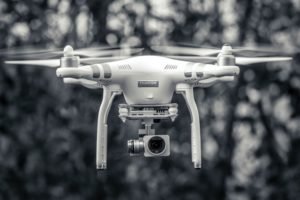 The trade war is heating up – and it could mean a ban on Chinese drones.  Part 1 of a 2 Part Series taking a deeper look at what’s happening.

As the war against China-owned technology companies heats up, some federal lawmakers have set their sights on drones made in China or that have Chinese components, seeking to ban them from use by U.S. federal agencies.

In addition, recent actions by the Trump administration make it appear likely that the administration itself may weigh in against drones made by Chinese, as it has against other China-based technology companies.

On August 6, President Trump, citing security concerns similar to those raised against China-made drones, escalated his trade war with China when he signed a pair of executive orders effectively banning the use in the U.S. of two Chinese-owned software applications TikTok and WeChat.

In his executive order to ban TikTok, Trump wrote “the spread in the United States of mobile applications developed and owned by companies in the People’s Republic of China (China) continues to threaten the national security, foreign policy, and economy of the United States.”

The order goes on to say that data collected by TikTok “threatens to allow the Chinese Communist Party access to Americans’ personal and proprietary information,” reflecting arguments some have used to call for limiting the use of drones produced by DJI and other Chinese companies from use by U.S. federal agencies.

Two bills pending before Congress seek to do just that. Senate Bill 2502, The American Security Drone Act of 2019, a bipartisan Senate bill sponsored by Republican Senator Rick Scott of Florida, would prohibit any federal agency from buying drones and related equipment from any “covered foreign entity” as determined by the secretary of Commerce. Covered foreign entities include China and the Chinese communist party. The legislation would also prohibit the use of any federal funds in the form of grants or contracts by educational institutions or state and local governments to buy the covered drones or associated components or systems.

An aide to a Democratic senator familiar with the bill said it was almost included as an amendment in the National Defense Authorization Act for Fiscal Year 2021, which was introduced in the House in June, but was struck from that must-pass legislation at the last minute. The bill was passed by the Senate Committee on Homeland Security and Government Affairs in March.

House Bill 4753, the Drone Origin Security Enhancement Act, sponsored by Dan Crenshaw, a Texas Republican, is less broad than the Senate bill. It would enact a similar ban on purchases of drones and related unmanned aircraft systems (UAS) by the Department of Homeland Security. The legislation was passed by the House in February and sent to the Senate, where it was referred to the Committee on Homeland Security and Governmental Affairs.

In addition to the pending legislation, it has been widely reported that President Trump is considering issuing an executive order that would ban the use of Chinese-made drones by all federal agencies.

If a ban on Chinese-sourced drones goes into effect for U.S. agencies, it would mark the latest in a series of steps that the government has taken over the past several years targeting drones made in China, and by extension top drone manufacturer DJI, based on alleged security concerns.

In August, 2017 the U.S. Army issued a blanket ban on all DJI drones. In May 2019 the U.S. Department of Homeland Security issued an advisory warning U.S. companies against the use of China-made drones. Most recently, in January the Department of the Interior grounded its fleet of more than 800 drones, saying that since they were all either manufactured in China or potentially had components that were, they represented a potential security concern.

In recent weeks tensions between the U.S. and China have heated up even more, over a host of national security and trade issues, including allegations by the Trump administration that China was responsible for the spread of the deadly corona virus.

Last month, the Trump administration ordered the closure of the Chinese Consulate in Houston, alleged it was a hotbed for corporate and national security espionage. Following the order, in a scene straight out of a political thriller, Houston firefighters stood by helplessly as Chinese officials burned documents in the courtyard of the consulate compound. In retaliation China closed the US consulate general in the Chinese city of Chengdu.

“The way to look at this is to view it in the context of the broader policies that this administration is taking with respect to their trade war with China,” Justine Kasznica a technology and commercial transactions attorney with Babst Calland, said in an interview.

“This follows on the heels of what we saw with Huawei, with the administration essentially placing Huawei on the debarred list.”

In a recent interview, DJI spokesman Michael Oldenburg commented on the pending legislation targeting Chinese-sourced drones and systems. “Broadly what you’re seeing are a country of origin-based policy and restrictions, which we are opposed to. It’s a litmus test for drone security technology, simply based on where the technology is manufactured, which is not a good policy,” he said.

Currently DJI drones and related products hold about 70% of the U.S. consumer and prosumer market.  Oldenburg said the “anti-China initiatives related to drone technology” being forwarded by President Trump and his allies is part of an effort to let drone companies based in the U.S. and allied countries gain a foothold in the U.S. drone market.

He pointed to a memorandum to the secretary of Defense that President Trump signed in June 2019, citing the Defense Production Act of 1950. The memo found that “the domestic production capability for small unmanned aerial systems is essential to the national defense.”

“It’s apparent that the U.S. government is working as quickly as they can to fund and prop up an American drone manufacturing ecosystem to compete with foreign competitors,” Oldenburg said.

But advocates for a ban on China-made drones cite reports of software bugs in DJI products, which they say could expose users’ data to hacking. And they point out that as a Chinese company, DJI would be bound by the China Cybersecurity Law of 2017, which requires Chinese companies to store data within China, where it can be accessed at will by Chinese authorities .

“I think it’s important to recognize that the Number 1 priority of the senators for this legislation is to protect national security,” the Senate staffer said. “I think a secondary benefit of that is that it encourages domestic drone production.”

Following last month’s release of two reports pointing to potential software vulnerabilities with the DJI Go app, Crenshaw tweeted “China not only steals our technology and IP, but weaponizes their exported technology for mass surveillance. I sponsored HR4753, the Drone Origin Security Act, to ensure DHS doesn’t use these compromised systems.”

James Poss, CEO of intelligence and UAS consulting firm ISR Ideas, said the problem with drones that contain computer chips manufactured in a foreign country, is “you don’t know if they put in a backdoor in that chip that allows access for an intelligence agency or some other nefarious person.”

Poss, a retired Air Force major general, also complained that because of “Chinese dominance of the small drone market,” there are as yet few alternatives for many government agencies to flying China-made drones. “The fact of the matter is there isn’t solid competition to DJI out there,” he said.