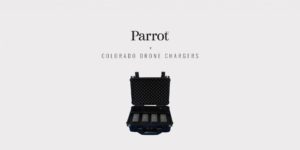 European drone maker Parrot has announced a partnership with Colorado Drone Chargers to market what company officials are calling a “revolutionary charging system.”

The CDC ANAFI USA PRCS Elite will recharge four batteries from a 20 percent charge level to a full charge in approximately 60 minutes, freeing up pilots to carry fewer batteries in the field.

“We have placed an extreme focus on battery performance and weight, to have the best flight time to weight ratio ensuring you can not only have a reliable flight time of +30 minutes but also easily deploy and carry the system anywhere to achieve a professional mission, of course having a great flight time with a heavy weight is not realistic for real professional users. The CDC charging system complements and takes even further the capabilities of always being mission ready and professionally deployable for high frequency constant professional usage.”

“Time spent recharging can be the difference between saving life for first responders or even professional pilots losing a contract. Creating a quick charging system to charge Parrot’s ANAFI USA’s flight batteries will make a monumental impact on the professional industry. Needs are evolving, and we’re continuously listening to customers and the drone industry to make essential changes.”

A partnership with an American company producing a domestic product can only strengthen Parrot’s favored status with the U.S. government. In August, the defense department released a list of government approved drone providers that included the French drone maker along with Skydio, Altavian, Teal Drones, and Vantage Robotics. The agreement comes weeks after the justice department’s ban on the use of DOJ funds for any drone manufactured by a “Covered Foreign Entity” – a move seen by industry experts as a means to target Chinese drone manufacturer DJI as another political salvo in the Trump Administration’s protracted cold trade war with China.

Parrot in the News