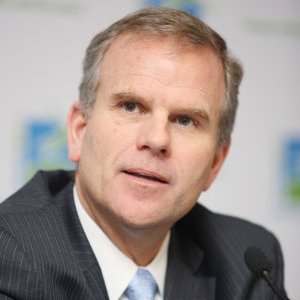 InterDrone Gets Started with Dan Elwell: FAA is “Open for Bu…

Elwell opened up by saying that he understood that the drone industry might be hesitant about federal regulators.  But Elwell emphasized throughout his speech the FAA’s willingness to work with the industry.

“Believe it or not, ” said Elwell, “We all want the same thing…we’re ready for the day when drones are fully integrated.”

“Remotely piloted aircraft are a disruptive technology,” says Elwell. “..They’re going to do for aviation what the Internet did for information.”

While drone integration is the goal, Elwell points out that not everyone is on board.  “The public has very real concerns,” he said. “These can’t be swept under the rug.”

Elwell used the recent events in Venezuela as an example that one bad actor can have an outsized impact on public opinion.  But, he says, public opinion is still being formed – and that’s a good thing.  As the FAA and the drone industry respond to public concerns, he says, its an opportunity to help mold and improve that opinion.

Elwell says that drone integration is a focus for the agency, and they are “100 percent committed” to that goal.

“If there is one thing I want you leave here with, it’s this: the FAA is open for business,” says Elwell.  “We are not your adversary.”

Pointing out some recent successes as part of the UAS Integration Pilot Program (IPP), Elwell emphasized that drone integration is a focus throughout the current administration.  “Innovation is one of Secretary Chao’s top three priorities,” he points out.  But while the IPP and other projects are important steps forward, there are still critical barriers in place to total integration. “They are issues that we can’t address alone,” says Elwell.

Elwell made it clear that remote ID and tracking for drones was a critical step to completing drone integration.  Comparing drones to cars, which are all identified by license and registration, Elwell says that ID and tracking is a reasonable requirement.  “The national airspace system is no place for hide and seek,” says Elwell.

Towards that end, Section 336 is on the block. “The FAA’s hands are tied” by the law restricting them from imposing remote id and tracking on model aircraft, he pointed out, but they are working on dismantling the law – perhaps, he indicated, as soon as with the current FAA Reauthorization package, currently in the Senate for discussion.

“As soon as this gets resolved, rest assured that we are ready to move forward as quickly as possible,” said Elwell.

Finally, Elwell says that it is up to the drone industry to help shift the conversation and opinion of drones in the public sector.  It’s not enough to talk about the benefits and features of drone technology: the industry needs to address public concerns.