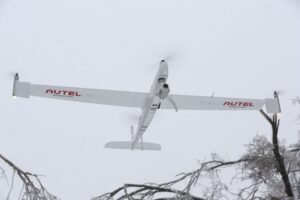 Ahead of CES 2021, drone company Autel announced the release of the new Dragonfish flight platform for the second quarter of this year. A fixed-wing drone, Dragonfish offers a 120-minute flight time as well as takeoff/landing capabilities in space-restricted areas and an deployment assembly time of under three minutes.

With a range of up to 18.6 miles, the Dragonfish also features adaptive tracking, allowing the drone to track vehicles, persons or other moving objects from a range of 6,560 feet

Payloads include a FLIR Boson Radiometric camera, a one-inch sensor photographic cameras and other payloads for specific vertical requirements. “The system is expandable to fit into virtually any workflow, although the Dragonfish was specifically designed for overwatch and other public safety uses,” an Autel press release notes.

“The Dragonfish is mission ready right out of the box and includes powerful Al tracking capabilities and a multitude of modular payload options,” a company press release notes.

“An endurance of 120 minutes further augments the Dragonfish’s robust mission capabilities and pushes it significantly ahead against other VTOL competition. Additionally, the Dragonfish is equipped with two RTK modules for redundancy. Integrating the GNSS Base Station with the RTK modules, the Dragonfish may achieve centimeter accuracy with precise headings and strong anti-magnetic interference capabilities. The RTK modules back up one another and greatly improves the quality of image metadata for photogrammetry while increasing flight precision and safety.”

Dragonfish ships with a high resolution (2048×1536), 9.7 inch, ultra-bright TFT-LCD touchscreen as part of the Autel Ground Control Station which offers a battery life of up to 6 hours. Autel Robotics new antenna design allows the video transmission to reach up to 18.6 miles.