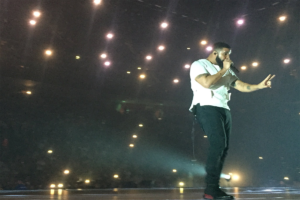 Verity Studios Will Light Up Drake’s Latest Tour with Drone …

“Elevate, a song on Drake’s new album Scorpion, opens with the micro drones swarming onto the stage to surround Drake in a cloud of lights to the roar of the audience. In another guest appearance, the Lucie micro drones create a glittering wave in the song Look Alive before forming a red 3D cross that rotates around Drake.”

Verity officials say the Grammy-winning rapper’s tour is the first of its kind to launch Lucie micro-drones on the heels of shows for rock stars Metallica and Circus Knie.

Founded in 2014, Verity has offered AI/robotics shows across a variety of live events with more than 30,000 flights. The company’s autonomous drones have performed in more than 20 countries and in a variety of venues, including on Broadway in Cirque du Soleil’s Paramour and at the New York Knicks pre-game shows at Madison Square Garden.

“People often describe technologies they’ve never seen before as ‘magic’. This is also how people talk about our drones when they see them live for the first time,” Verity founder Raffaello D’Andrea said.

“By bringing robotics and AI to live events, we are creating magic. It’s spectacular to see a swarm of drones performing a perfectly synchronized aerial ballet without a single drone pilot in sight. Of course, what’s powering this performance is advanced technology, but when you sit in the audience, all you see is magic.”

The drones will be operated exclusive by Drake’s touring staff and can perform choreographies autonomously.

“When the Drake team approached us, they said they wanted something that had never been seen before,” D’Andrea added. “Our drone choreographers worked in partnership with Drake’s creative team to come up with various concepts for the show, like geometric shapes and drone tornadoes.”

Such shows have shown a new light on drone innovations. In July, Intel set a world record for most drones launched in a light show using more than 2,000 LED-laden drones.

Beginning his career as a journalist in 1996, Jason has since written and edited thousands of engaging news articles, blog posts, press releases and online content. He has won several media awards over the years and has since expanded his expertise into the organizational and educational communications sphere.

In addition to his proficiency in the field of editing and writing, Jason has also taught communications at the university level and continues to lead seminars and training sessions in the areas of media relations, editing/writing and social media engagement.