Northrop Grumman and Raytheon Technologies demonstrated their systems that can enable a single user to control a swarm of more than 100 drones in an urban setting as part of an experiment held in November at Fort Campbell in Kentucky, C4ISRNET reported Friday.

The companies participated in the experiment under two contracts the Defense Advanced Research Projects Agency awarded in 2017 as part of the OFFensive Swarm-Enabled Tactics program.

The Raytheon BBN-built system enabled a single operator to direct 130 physical unmanned platforms and 30 simulated drones in a swarm. Northrop’s technology allowed a user to manage a swarm of 174 systems.

“Combined air and ground behaviors, such as intel recon and area patrol, are some of the swarm tactics employed. We also were able to sustain swarm operations for up to 3.5 hours,” said Erin Cherry, senior technical program manager of emerging capabilities development at Northrop.

Raytheon BBN’s swarming technology includes custom-built and commercial-off-the-shelf hardware and software and a virtual reality headset for the operator.

The companies plan to demonstrate their systems at the Army Expeditionary Warrior Experiment that will be held in March at Fort Benning in Georgia. 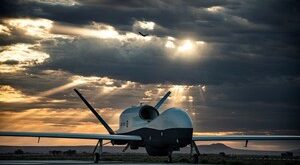