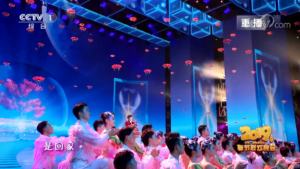 During a song, the drones flew from the back of the stage festooned in red “drone costumes” shaped like lanterns and hovered like butterflies over 50 performers dressed as blossoming cherry trees.

“This stunning performance proves how compelling drones can be. More than just flying lights, we’ve shown that costumes can transform this technology into moving sculptures. This is the first large-scale performance ever done with drone costumes,” said Raffaello D’Andrea, founder of Verity and co-founder of Amazon Robotics.”

The program was produced by Léa Pereyre, a Verity designer billed by the company as the world’s only drone costume designer.

A company statement explains the process:

“Pereyre creates the costume design in CAD software before laser-cutting the materials and assembling the costumes. The drones feature special guards that have pre-defined slots to easily attach costume elements. This concept makes it easy to quickly create large numbers of costumes and transform drones into moving pieces of scenography, props and even characters.”

Asia production company Keey Media collaborated with Verity. “When the drones floated up from the back of the stage, it was a very special moment. We specialize in live entertainment, but we’ve never seen anything like this before. We see a lot of potential in this technology for entertainment and we’re excited to see what comes next,” Keey Media spokesperson Wan Li said.

Founded in 2014, Verity has produced several drone programs for major artists, including Cirque du Soleil, rapper Drake and Metallica. With more than 100,000 flights across 20 companies, the firm has raised $18 millions in a Series A funding round, “making Verity the world’s most well-funded company in the rapidly emerging commercial indoor drone market.”