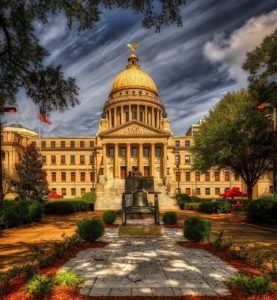 Proposed Mississippi drone laws are extremely problematic for the drone industry – and the Drone Service Providers Alliance (DSP) is calling on all operators in the state to educate themselves and their representatives.

If passed, the bills currently in committee could significantly impact Mississippi drone owners: and set dangerous precedents for other states.

“If these bills pass from committee into law, it has the very real potential of causing Mississippi drones owners to break the law daily,” says Vic Moss, Vice President of the Drone Service Providers Alliance and a professional drone operator.

Senate Bill 2262 creates a problem with Federal preemption, the concept that the FAA controls the airspacee.  The proposed bill “would create such things as a law that would allow airspace ownership for landowners,” says Moss in a DSP blog post. “Usage is one thing, but giving landowners a vested interest in the airspace above their land sets some very scary standards. It literally creates “Private Airspace”.”

The bill would also allow the Mississippi DOT to lease easements over roads and waterways: potentially granting some parties exclusive use of these routes.

While Moss points out that this bill is unlikely to pass, he says that another House bill may make it out of committee – and it’s even more dangerous to the drone industry.

Another proposal, HB 291,  has a very real chance of passing out of committee.  Crafted to protect critical infrastructure, at first glance the bill seems reasonable – but too much detail makes this proposal extremely problematic.

Even more concerning are definitions that attempt to cover any item not listed, and enumerating drone applications that are already covered in other laws.  Moss writes:

But the list crosses the line from ridiculous to humorous in Sections (xii) & (xiii). There it states, “Any other facility completely enclosed by a fence or physical barrier designed to exclude intrusion… Any other facility marked with a sign or signs that are posed [posted?] on the property.” Now every cow pasture and every cotton or soybean field in the state of Mississippi are “critical infrastructure”. That’s just silly.

….Section 3(b) is a good part of the rule for sure. It makes is a felony a use a drone to delivery contraband into “a correctional facility property or adjacent property for the purpose of introducing contraband into a correctional facility.” Why? Is it legal to do so if you don’t use a drone? Why go to the trouble of introducing the vehicle of delivery into this law?

A law which attempts to further define something already illegal causes problems for lawmakers and law enforcement, Moss points out.  “…Every time you add a layer of complexity and definition to an existing law, you add a layer of loopholes. Laws like contraband introduction should remain as technologically agnostic as possible.”

To ensure that Mississippi drone laws remain easy to understand and favorable to business, the drone industry needs to ensure that they do their part to educate lawmakers – about their concerns, and about the potential benefits that the drone industry has to offer communities in the state.  Drone Service Providers Alliance has provided the contact information below to assist.

For the House Bill (HB 291), please respectfully reach out to Representative Nick Bain. His page is http://billstatus.ls.state.ms.us/members/house/bain.xml.

For the Senate Bill (SB 2262), please respectfully reach out to Senator Brice Wiggins. His page is http://billstatus.ls.state.ms.us/members/senate/wiggins.xml.

If you’re a resident of Mississippi, find your local legislators and contact them expressing (again, respectfully) your displeasure with the bill. And if you’d like to talk it a step further, reach out to the committee members of each chamber where the bills currently live. All of that information is at http://www.legislature.ms.gov/legislators/