New Delhi: India will need approximately 100,000 drone pilots in the coming years as the sector is on the path of “exponential growth”, Union civil aviation minister Jyotiraditya Scindia said on Tuesday, adding that the country has the potential of becoming a global drone hub by 2030.

“We are taking the drone sector forward on three wheels: policy, incentives and demand creation… Today, a drone pilot can be trained in 2-3 months. Close to one lakh (100,000) drone pilots will be needed in the years to come. The opportunity is tremendous,” Scindia said at the launch of NITI Aayog’s Experience Studio on Drone, an initiative to promote a collaborative ecosystem aimed at fostering innovation and adoption of drones for public services.

“It is Prime Minister Narendra Modi’s aim to make India the global drone hub by 2030. NITI Aayog and the (civil aviation) ministry are working towards this,” the minister said.

Elaborating on the three wheels to take forward the drone sector, Scindia said, “The first wheel is of policy. You have seen how fast we are implementing the policy.”

The second wheel is to create incentives, he said. “The PLI (production-linked incentive) scheme, which has been implemented under the leadership of PM Modi, will give a fresh boost to manufacturing and services in the drone sector,” Scindia added.

The PLI scheme was introduced in September last year as a follow-through of the liberalised Drone Rules, 2021, released by the ministry on August 25 last year.

The minister said the third wheel is to create indigenous demand and “12 central ministries — including agriculture, mining and rural — have tried to create the demand for the use of drones”.

The minister said that close to “15-20 drone schools have been certified across 12 states so far”.

Scindia, along with Madhya Pradesh chief minister Shivraj Singh Chouhan, inaugurated the country’s first drone school in Gwalior in March this year. On Tuesday, Scindia said the civil aviation ministry will organise a two-day Bharat Drone Utsav in New Delhi from May 27.

The government is working towards making drone services easily accessible, he said. “With the active participation of the stakeholders of the drone industry and the government of India, the drone industry is set on a path of exponential growth. The government will enable the continuity of this accelerated drone adoption by easing drone regulations and through drone literacy via programmes such as Drone Shakti and Kisan Drones,” Scindia added.

In the nearly month-long Niti Aayog’s Experience Studio on Drone initiative, discussions and events regarding the sector will be held.

Speaking the event, NITI Aayog’s vice chairman Suman Bery, who took charge on May 1, said, “Drones are expected to be significant creators of employment and economic growth due to their reach, versatility, and ease of use, especially in India’s remote and inaccessible areas. The NITI experience studio launched today shall help promote various applications of drone technology to public and private stakeholders as well as help them fast-track adoption of drone technology within their organisations and aid in building a robust drone industry in India.”

The civil aviation ministry and NITI Aayog have launched two challenges: Drones for Social Impact Competition and Robotics workshop and competition for the start-up community and students of Atal Tinkering Labs respectively.

Amitabh Kant, NITI Aayog’s chief executive officer, said the experience studio will help start-ups showcase their innovations and next-gen technology-enabled solutions. “It will allow various government departments to experience these technologies first-hand and think about how they can be contextually used on the ground in public services. It will also act as an anchor for initiating proof-of-concepts and pilots aimed at solving issues that persist in service deliveries.” 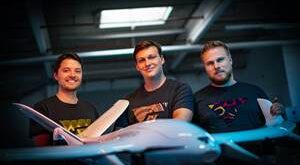