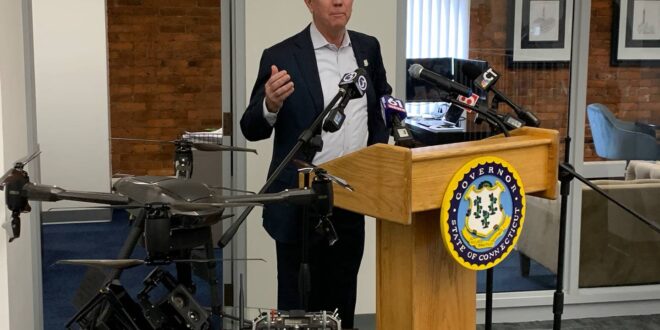 Hartford — Gov. Ned Lamont offered a glimpse of what a post-pandemic recovery might look like Tuesday when he invited reporters to a drone manufacturer that has taken over 15,000 square feet of office space in downtown Hartford.

“You don’t have to have 3,000 employees necessarily, but there will be 300 companies with 100 employees,” Lamont said. “That’s going to be the future.”

Within the 17-story Stark Building, Aquiline Drones employs 25 and has plans to soon double it workforce, potentially adding a second shift. The arrival of the company in Hartford suggests that downtown Hartford may have very different tenants filling up office buildings.

“Obviously, the nature of work has changed forever, I think, and the nature of great big commercial office spaces may be a little bit more a thing of the past,” Lamont said Tuesday, at the drone company. “I think there will be a lot of start-up companies, I think a lot of smaller companies.”

Despite the pandemic, state officials say the number of new startup companies in Connecticut rose 9% in 2020, compared with the previous year.

“Connecticut had its heyday as far as the insurance industry, but what you see today is a new day in Connecticut’s economic evolution in that technology and manufacturing are alive and well and can thrive,” Barry Alexander, chairman and chief executive of Aquiline, the drone manufacturer. The company was founded in 2019 in Hartford.

COVID-19 has all but emptied office buildings nationwide, ensconcing workers in their homes to perform their jobs for nearly a year. How quickly those workers return to their offices and to what degree is being debated.

[ CityPlace I Owners Seek Image for New Generation of Tenants ]

But most experts agree that workers across a broad swath of industries will permanently spend at least some of their workweek at home, causing companies to reconsider just how much office space they actually need.

Hartford Mayor Luke Bronin said he is concerned about future downsizing and rising vacancies in office space in downtown Hartford.

Catch up on the day’s top headlines sent directly to your inbox weekdays at 3 p.m

“There’s no question about it,” Bronin said. “When I look at our fiscal position as a city in the years ahead, that is one of the biggest risks that I see. On the other hand, I do think there are opportunities to seize right now to try and mitigate that risk.”

Bronin said part of the strategy is nurturing companies like Aquiline Drones, which has a lofty aspiration of making Connecticut the drone capital of the country.

In recent years, Bronin’s administration has pushed for a stronger focus on emerging companies in technology for the insurance industry, advance manufacturing and digital health. The initiative is aimed at raising Hartford’s profile as a technological innovation hub, a 21st century take on the city’s history as a center of manufacturing innovation.

The idea of moving away from office towers as the sole domain of big-name companies isn’t necessarily new. In downtown Hartford, the owners of the CityPlace I office tower have been talking about attracting startups since at least 2017. But the pandemic could accelerate the shift.

Bronin said companies leasing in Hartford may be assessing their space needs for after the pandemic. But that also is happening in higher-cost cities like New York, Boston or San Francisco. For a fraction of per square foot costs, Hartford and other Connecticut cities offer an attractive alternative, with ample access to talent pools of potential employees, Bronin said.

“There is an opportunity for that future for Hartford and other Connecticut cities to grab some of those companies,” Bronin said. “Coming out of COVID, a big part of the recovery is going on the road and making this pitch.”