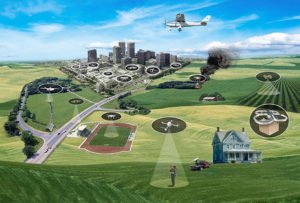 The FAA announced today the selection of five American airports to evaluate technologies that could detect and mitigate potential safety risks posed by rogue drones.

As part of its Airport Unmanned Aircraft Systems Detection and Mitigation Research Program, the FAA chose:

The federal agency hopes the plan will make airports safer for passengers and manned aircraft. Researchers plan to test and evaluate at least 10 systems across the five airports.

Testing will begin later this year and continue through 2023. FAA officials say the plan will create standards for future drone detection and mitigation technologies at airports around the country.

“The FAA Reauthorization Act of 2018 requires the agency to ensure that technologies used to detect or mitigate potential risks posed by unmanned aircraft do not interfere with safe airport operations. The FAA does not support the use of counter-UAS systems by any entities other than federal departments with explicit statutory authority to use this technology, including requirements for extensive coordination with the FAA to ensure safety risks are mitigated.”

The FAA move is part of a greater program to create a unified traffic management system across the U.S. airspace to encompass safer manned and unmanned flight.

In January of 2019, the FAA began Phase I of the UTM Pilot Program (UPP.)  Phase I objectives included  “(1) the exchange of flight intent among operators, (2) the generation of notifications to UAS Operators regarding air and ground activities, known as UAS Volume Reservations (UVRS), and (3) the ability to share UVRs with stakeholders, including other UAS Service Suppliers (USS) and the Flight Information Management System (FIMS),” according to the FAA.  This phase was completed in August of 2019.

UPP Phase 2 will test Remote ID capabilities and unmanned traffic in increasingly dense airspace, such as may be found in urban areas or around major airports.  In April of 2020, the FAA chose the NY UAS Test Site at Griffis International Airport  and the Virginia Tech, Mid Atlantic Aviation Partnership (MAAP) as the Phase 2 test sites: Northeast UAS Airspace Integration Research Alliance, Inc. (NUAIR), which manages the NY UAS Test Site, announced that virtual collaboration with technology partners began in April and live flights are set to begin this month.

Miriam McNabb contributed to this report.