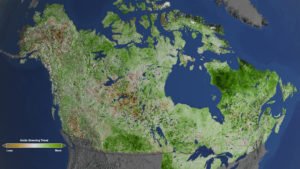 The Arctic is getting greener…and that is a very bad thing.  Contrary to what you may have remembered from your grade school days, the Arctic is not the barren wasteland of ice that you may envision.  The Arctic is a rich environment where plants such as dwarf shrubs, a variety of grasses,  lichens, herbs, and mosses form the tundra: especially in the lower portions of the arctic.

Relatively small increases (or decreases) in temperature can dramatically effect the types and numbers of plants that can survive and thrive in different environments.  (It is easy to notice this in many parts of the world on a small scale: one community will get snow because the temperature is  below freezing, while a neighboring community will get rain.) 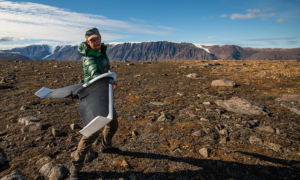 The latest drone and satellite technology is helping an international team of researchers, including experts at the University of Sheffield, to better understand how the vast, treeless region called the tundra is becoming greener.

With advances in drones technology, aided by satellite imaging, scientists are now able to get a better picture of more macro levels of change.   By comparing images from years or decades past, scientists are able to determine both the change and the rate of change that effect various regions of the world.

Drone images enable scientists to more accurately determine the size and relative health of individual plants. Drones are especially good at gathering this type of data as they fly so much lower; and can be piloted to explore particular small pieces of land or even individual plants.

A recent paper details this change with the addition of drone imaging data. The paper, recently published in Nature Climate Change, was funded in part by the National Geographic Society and government agencies in the UK, North America and Europe, including NASA’s Arctic Boreal Vulnerability Experiment (ABoVE) and the UK’s Natural Environment Research Council.

Co-author Professor Gareth Phoenix, Professor of Plant and Global Change Ecology at the University of Sheffield, said: “The greening of the Arctic has been one of the clearest consequences of climate change we can see in the natural world. However, with more damage now coming from extreme weather events and fires that kill tundra plants, we have a big challenge ahead if we are to predict what the future holds for Arctic ecosystems, as well as how changes there will affect the rest of the world.”

Lead author Dr Isla Myers-Smith, of the University of Edinburgh’s School of GeoSciences, added: “New technologies including sensors on drones, planes and satellites, are enabling scientists to track emerging patterns of greening found within satellite pixels that cover the size of football fields.”

Share
Previous “The Window of Opportunity is Narrowing”: Drones And Other U…
Next The Best Photography Drones of 2020