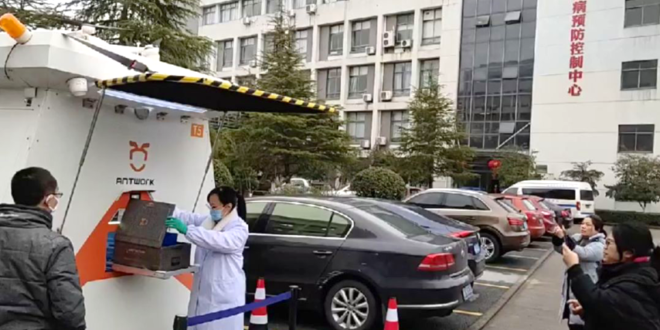 Drones are Being Deployed in the Fight Against Coronavirus

Last month, aerial footage emerged from a busy intersection in Shuyang, northern China. The video – admittedly a piece of state propaganda – shows drones equipped with loudspeakers being used by law enforcement. The purpose? To remind pedestrians to wear their facemasks in an effort to slow the spread of the Coronavirus.

The latest figures from mainland China put the death toll at higher than 700, with the number of confirmed Coronavirus cases standing at around 35, 000.

Outside China there have been 270 cases confirmed in 25 countries. The World Health Organization (WHO) has confirmed two fatalities – one in Hong Kong, another in the Philippines.

Surveillance drones aren’t the only way the technology is being deployed against the virus in other ways in China.

Last week, Chinese agriculture technology company XAG announced a 5-million-yuan fund for coronavirus response, which will be put towards aerial disinfectant sprays to curb the spread of the virus in rural areas.

The news came after the company’s fleets were used in China’s Shandong province on 28 January, where they reportedly disinfected a local community of over 300,000 square metres in less than 4 hours.

In recent days, Japanese drone company Terra drone has, through its group company Antwork, been developing a solution using UAVs to transport medical samples from the Hospital of Xinchang County to a local disease control center in Zhejiang.

Zhejiang province is one of the most severely hit by the virus. Already more than 1,000 patients have been diagnosed.

In order to support the various controls brought in to halt the epidemic, Antwork has been working with local hospitals to enable the timely and rapid delivery of medical samples and protection materials using its drone transportation network.

By automating the process and taking humans out of the equation, the contact opportunities between samples and personnel in the transportation process will be dramatically reduced. Delivery speed also promises to be faster than transporting via road.

According to a press release, Antwork moved quickly following the Coronavirus outbreak in Wuhan.

The company contacted the health and disease control departments of various regions and petitioned to use drone transportation to support frontline medical institutions fighting against the epidemic.

After the project of Xinchang people’s hospital is put into operation, the company says, Antwork will aim to assist more medical institutions across China.