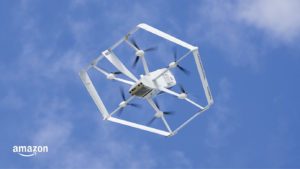 Read or listen to all of the headlines in one place: excerpts from the DRONELIFE drone news of the week, June 24.  Click on the links below to read or listen to each story in full.

This Saturday, June 17, is FAA Drone Safety Day: and the Full Crew Podcast, Dave Krause of Influential Drones and Greg Reverdiau of the Pilot Institute have partnered to produce a video featuring FAA drone experts and FAASTeam drone pros.

Watch the Full Crew Video on Saturday June 17 at 11 am EST.

The DeltaQuad, an industrial-grade Vertical Takeoff and Landing UAV that performs fully autonomous surveillance missions, recently integrated a ruggedized GPS system capable of enduring even the most advanced jamming technology.

Despite escalating global tensions resulting in an increasing demand for aerial intelligence platforms, most current commercial platforms lack the means to defend against the latest jamming technology, having their GPS and communication links jammed before they can even take off.  To address this issue, DeltaQuad’s R&D team has worked over the past several months to successfully integrate one of the most advanced anti-jamming GPS systems currently available.

This week saw the start of the 2022 DRL SIM Tryouts, an annual esports tournament that provides the winner with a contract to fly in the Drone Racing League (DRL). The SIM Champion will compete against the top drone pilots in the 2022-23 DRL Algorand World Championship Season in a series of events taking place in real life as well as in esports and the metaverse. This fall, the Championship will be aired on top sports networks worldwide.

As drones continue to proliferate, a small number of actors who fail to follow the rules, have the potential to set the burgeoning drone industry back. D-Fend Solutions, anemerging leader in counter-drone technology, aims to protect the emerging drone-powered society while overcoming the threat posed by rogue drones.

This past Thursday saw Vantis, North Dakota’s statewide unmanned aircraft systems (UAS) system, formally celebrate the grand opening of its Mission and Network Operations Center (MNOC) at GrandSky Business and Aviation Park.  The MNOC acts as Vantis’ command center and is essential to the coordination of beyond-visual-line-of-sight (BVLOS) flight operations.

Amazon Drone Delivery: A Brief History of the Patents, Problems and Progress from the DRONELIFE Archives

Amazon has announced that it will finally start an Amazon drone delivery project in the U.S., beginning in the small town of Lockeford, CA.

The announcement comes more than 8 years after Amazon announced that it would pursue drone delivery, and the company has had an undeniable impact on the way that the application has developed.   Throughout the development of multiple drone solutions, Amazon also sought patents for many innovative ideas for bringing inventory closer to consumers, charging delivery drones, landing logistics, and more.

Join Dawn and special guest Sean Guerre,  Managing Director at InnovateEnergy and leader of the Energy Drone and Robotics Coalition (EDRC) LIVE at the EDRC Summit in Houston, Texas! The two will discuss this year’s Summit theme “Innovating Energy Operations with Unmanned Systems” and how the EDRC is connecting the community through digital resources and virtual live and hybrid events and the hottest trends in the uncrewed energy sector.

Red Cat 4 Ship: One Pilot, Four Drones; Will a Multi Drone System Be the New Normal?

The future of commercial drone and military drone use is likely to hinge on the development of technology allowing simultaneous flight of multiple drones, with each UAV being able to communicate with its mates as well as the operator on the ground, in order to successfully complete a mission.  Red Cat Holdings recently announced the launch of its version of a multi-drone system. The company says its 4-Ship software, marks the first time a commercial company has brought such a system to market. The product, which will be commercially available some time this fall, is expected to have widespread applications for military and police as well as future uses in commercial markets.

Wingcopter Funding: $42 Million in Latest Round, Over $60 Million Total for Drone Delivery

This week, drone delivery company Wingcopter announced its acquisition of $42 million in funding from a Series A extension round, tripling the company’s total equity raise to over $60 million.  The round saw participation from new shareholders such as German retailer REWE Group, and German investors Salvia and XAI technologies, as well as Japanese conglomerate ITOCHU and previous backers Futury Capital from Germany and Silicon Valley-based Xplorer Capital.

Click on each headline to read or listen to the drone news of the week in full!