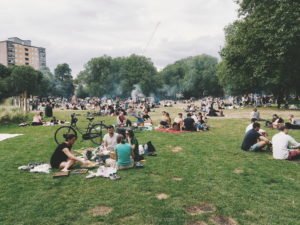 Drone Flight Over People When its Allowed

Part of an occasional series, “Things the FAA Wishes More Pilots Knew.”  This article explains what drone flight over people really means, and when it is – and isn’t – allowed.

This fall, DRONELIFE had the privilege of speaking on a panel with representatives from the FAA.  After some discussion, we decided to collaborate on a series of articles pointing out some of the most common mistakes and misconceptions about drone regulations.  We know that the vast majority of drone pilots make an effort to follow the rules: we’re doing our part by getting the word out on some issues that may be unclear.

“In many of my conversations with stakeholders about this topic, I hear people more focused on what EXACTLY constitutes “over” people (107.39), as if they need a laser beam to determine exactly whether the drone is over the person or not: but in doing so they tend to miss the bigger and more general prohibition against hazardous operation (107.23),” says John Meehan, Aviation Safety Analyst with the FAA.

“‘Over’ people means just that, directly over someone,” says Meehan.  “A good way to envision this is to imagine a cylinder of air that extends above a person. This cylinder could change diameter if the person is standing up vs. laying down, or arms extended or not. A drone would not be allowed to pass through that cylinder of air.”

The concept of “Hazardous Operation.”

For the FAA, drone flight over people is directly connected with the concept of “hazardous operation.”  Hazardous operation is endangering the safety of persons or property on the ground by careless or reckless operation of the UAS.

“First and foremost, it’s always good to start with the understanding that the intent behind the flight rules is aviation safety,” says Meehan.  “The fundamental concept is to fly in such a way as to not put people or property at risk of injury or damage.”

“Aviators continually evaluate and reassess what could happen if the aircraft fails to perform as expected, and adjust their flight accordingly to fly safely. UAS pilots are aviators, just as manned pilots are aviators.  Using aeronautical decision-making techniques, the aviator flies in a way that mitigates or minimizes risks to other persons or property.

For example, if you are flying in a strong crosswind, fly in a way that keeps the drone away from people and property in the event the UAS falls out of the sky, so that it doesn’t get blown into persons or property by the wind.”

What About the Exception for “Persons Directly Participating”?

There are limited exceptions to the prohibition against drone flight over people.  Part 107 Operational Limitations states: “Small unmanned aircraft may not operate over any persons not directly participating in the operation, not under a covered structure, and not inside a covered stationary vehicle.”  Those exceptions, however, are limited to only the pilot and visual observer in the drone mission.

“We often get questions about what is meant by ‘persons directly participating in the operation’,” Meehan says.  “The preamble to the Final Rule Part 107 does clarify that those persons directly participating in the operation are the flight crew only (RP and VO). They are not, however, the SWAT team; not the other Fire Fighters; and not the other survey team members, for example, who may be involved in a bigger operation that includes the use of a UAS.”

The Upshot on Drone Flight Over People: Straight from the FAA

Flight over people is considered hazardous – and that’s not allowed.  “Part 107, Part 91, and 49 USC 44809 (e) are clear.  The aviator may not operate a small unmanned aircraft system in a careless or reckless manner so as to endanger the life or property of another and the FAA may pursue an enforcement action against a person operating any unmanned aircraft who endangers the safety of the national airspace system,” says Meehan.

Meehan’s team lays out the specifics:

If the flight is governed by Part 107, the aviator must not fly over people (107.39) unless they are part of the flight crew or protected by a covered structure.  The aviator must conduct pre-flight planning and identify potential risks and hazards to the flight BEFORE they take off and must plan the flight path accordingly (107.49).  As part of a pre-flight, aviators always consider weather (107.49 and 107.51c) and identify hazards (likelihood and severity) because those factors can adversely affect the performance of the aircraft and safety of the flight.

If the flight is governed by Part 91, the operator may not operate a small unmanned aircraft system in a careless or reckless manner so as to endanger the life or property of another (91.13). There are also minimum safe altitudes that typically require a waiver to operate a UAS (91.119).

Some regulations such as 107.39 are waivable, however.  Anyone who wants temporary relief to the waivable Part 107 regs can apply for a waiver via DroneZone (https://faadronezone.faa.gov/)  Flights under Part 91 have a different process.