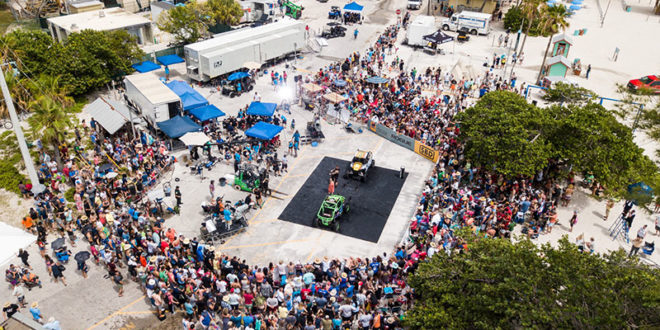 Jack Elka’s drone shot June 16 looking south from above the Tachi Palace World’s Strongest Man Competition at the Manatee Public Beach in Holmes Beach, shows a trio of men in black shirts, one of whom has his eyes fixed on Elka’s drone.

More than a week after a news photographer’s drone jammed while shooting the June 16 Tachi Palace World’s Strongest Man Competition in Holmes Beach, there are still no answers as to who — or what — is responsible.

After only a few shots, Elka’s screen froze and camera jammed, displaying the message reading “Communications failure with the drone.”

“Everything froze on the drone,” Elka said. “That’s the first time I ever got a message like that.”

Elka, who holds a Federal Aviation Administration license, knew how to manually retrieve the drone.

“I checked the drone. Shut it down. Restarted it and was getting ready to launch again when I heard the announcement,” Elka wrote to The Islander.

The public address announcement from the beach, also heard and confirmed by Holmes Beach Police Chief Bill Tokajer, warned anyone flying a drone to cease.

“This is a public safety announcement. Anyone flying a drone must land immediately. You are flying in our airspace,” an announcer said.

“I packed up and left,” Elka said.

Elka, certified in drone photography, has been shooting commercial photos and video on Anna Maria Island since 1980. He is certain his drone was intentionally jammed.

Cullen wrote in a June 20 email to The Islander that Melon was contracted to supply aerial video for the competition, from the parking lot and on the sand at the Manatee Public Beach, 4000 Gulf Drive, Holmes Beach, June 15-16. as well as earlier shooting in Bradenton and at Coquina Beach.

CBS is set to air the competition June 30.

Cullen said she regretted that prior coordination between the newspaper and the production company had not taken place.

“I’m sure they would have been more than willing to accommodate the Anna Maria Islander,” Cullen wrote.

She stated that Melon Sky did not “possess the technology to affect the drone’s flight,” but acknowledged being the source of the announcement.

“I can assure you that nothing at all was done on our end, other than the announcement,” Cullen wrote.

She said the announcement was made out of concern for crowd safety, “as we were flying multiple drones for the majority of the event.”

Without coordination, injuries could have occurred to spectators or staff, Cullen said and FAA regulations regarding close proximity drone flights also were a concern.

Elka said he is licensed and aware of FAA regulations and knows that temporary restricted airspace must be requested and registered with the FAA.

“I never received a notice from the FAA on restricted airspace around the event,” Elka said.

“It’s called geo-fencing. My software tells me when I am near restricted airspace, such as an airport, or when a presidential visit takes place. Airspace restriction must be registered. You can’t just claim it,” Elka said.

An aviation analyst with the FAA’s Unmanned Aircraft Systems Department said June 20 no airspace in its system had a temporary flight restriction in Holmes Beach or Anna Maria Island airspace. The analyst identified himself as Jonathan, but refused to provide a last name. The FAA press department did not respond before press time for The Islander.

Cullen said perhaps the problem was a communication error between Elka and the drone and “should probably be looked at by the manufacturer.”

Elka disputes that assertion, He said he had no prior issues with the drone and used it again June 21 to film the release of the tagged turtle Bortie Too at Coquina Beach.

“I know this,” Elka said. “They had no exclusive rights on my public beach. Whatever happened was and is a big mystery.”