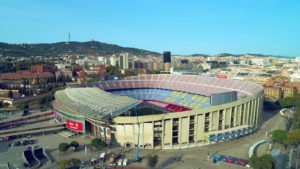 It wasn’t easy to put all the pieces in place – but last Saturday’s Barcelona Madrid match was the first ever Clásico to include live drone footage with the match coverage.  After a successful mission, directed by MEDIAPRO Group’s Overon Aerial drone services, it certainly will not be the last time drones are used to enhance the media coverage of major sporting events.

“LaLiga’s FC Barcelona – Real Madrid became the first game of its kind in history in which spectators were able to enjoy spectacular live drone footage from Camp Nou,” says a MEDIAPRO press release.

Overon Aerial aircraft served footage to the official match broadcast, providing live images of the Camp Nou stadium in Barcelona.  The team captured the pre-match preview, panoramic views of the stands, the arrival of the teams, the players’ departure to the dressing rooms, and shots of the entire city, providing television fans with an atmospheric experience of the game.  The team also provided footage of the start and ending of the match itself.   (See video below.)

It wasn’t easy to get all of the required permissions from airspace authorities as well as multiple security forces and the manned aircraft media coverage. “Overon Aerial professionals spent the last month ensuring the acquisition of all the required legal permits (AESA, Interior Ministry, etc.) in order to provide the never before seen footage of El Clásico,” says the press release.  The Barcelona Madrid match is a major event: a “high-risk match whose operations boasted the collaboration of the Technical Unit of Mossos d’Esquadra Air Security, as well as the Camp Nou Security department,” the release explains. “At all times, minute-by-minute coordination was required since the drone’s flight coincided with that of two helicopters hovering above the pitch, and even had to deal with everyday situations such as the detection of hostile aircraft.”

Overon Aerial has been pushing the boundaries of drone operation in sports since their inception. “As a pioneer in a booming sector, the firm currently employs 37 pilots who have delivered dozens of productions including coverage of LaLiga Santander matches, the Platinum Awards in Mexico, the European Triathlon Championship in Malta, the Spanish Rally Championship and the World Snowboarding Championship,” says MEDIAPRO.  Now that the team has proven the safety and success of drone coverage over a very high profile event, other major events may follow suit.