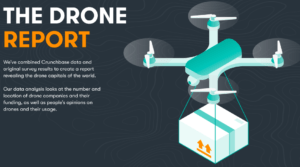 where drone companies are located

If you are looking for a job, or hoping to get into the business, you may want to know where the most drone companies are located.  RS Components has put together a report  outlining the drone capitals of the world.  Using Crunchbase data, the report also looks at investment funding for those drone firms listed.

The Drone Capitals of the World

Despite China’s manufacturing dominance, according to the RS Components list, the U.S. has the most drone business headquarters.

That may be because a “drone company” means a lot more than just drone hardware, and can be hard to define. New software platforms for the drone industry are helping to bring unmanned aircraft mainstream.  The RS Components’ Drone Report finds that there are more than 450 drone headquarters in the U.S.  China is the number 2 country, but their research found only 50 drone companies there: Japan is a close third with 47 drone businesses.

Where the Funding Goes 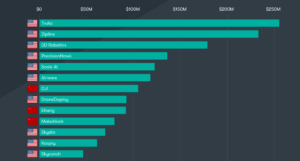 When it comes to funding, we found the RS Components data a little bit out of date – Skydio’s 100 million isn’t listed, so they aren’t on the top of the list.  SF-based Trulia is listed as the top funded company: but real-estate giant Trulia isn’t, strictly speaking, a drone company.  Startup Airware is still high on the list, and it’s true that they received significant funding in their time: but the company closed in 2018 and the assets were purchased by French firm Delair.

We get the gist, however.  Drone delivery pioneers Zipline head the list with more than $200 million in funding: there are at least 8 other U.S.-based drone companies who have received more than $50 million in investment capital.  China’s DJI, EHang, and Makeblock also make the list of the top 20.

What People Think About Drones (in the U.K.)

Another component of the RS Components list was public opionion, based on a survey they undertook in the U.K.  There the results pointed out that the drone industry still has a lot of work to do.  As long as 1 in 5 surveyed think drones are an invasion of privacy, and 30% view drones as a threat to passenger planes and other aircraft, the drone industry will struggle to grow around the world.