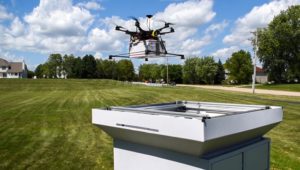 The Drone Delivery Station is a UAS landing solution with six separate storage units to accommodate multiple deliveries or pickups.

According to a Valqari press release, the platform is another addition to a product roster that “solved the last-inch logistics problem with its patented universal drone delivery infrastructure.”

The Station is entirely drone agnostic and enables a fully autonomous point-to-point delivery to provide a universal location for drone deliveries and pick-ups up to 25 pounds. The station maintains a digital chain of custody throughout the entire process to give help keep packages secure until retrieval.

The station can also accept a variety of parcels, including winched packages, hover-dropped packages. In addition, pickups and deliveries can be completed via landed drones and traditional methods.

“Our goal at Valqari is to keep paving the way for how people and businesses around the world send and receive packages in urban, suburban and rural areas,” Valqari CEO Ryan Walsh said.

“Current drone delivery applications don’t properly address the last stage in the delivery process. What we are creating is the only universal, standardized, safe, and secure drone landing station that protects people, property, and packages. Our new Drone Delivery Station is weatherproof, theft-proof and temperature controlled, which is critical for how items like food and pharmaceuticals are properly delivered.”

Valqari’s announcement comes at a time when industries are increasingly demanding secure, contactless deliveries amid the COVID pandemic.

Current partnerships with Valqari include:

A Valqari spokesperson said the station will debut in pilot tests later this year and that test footage is currently available.