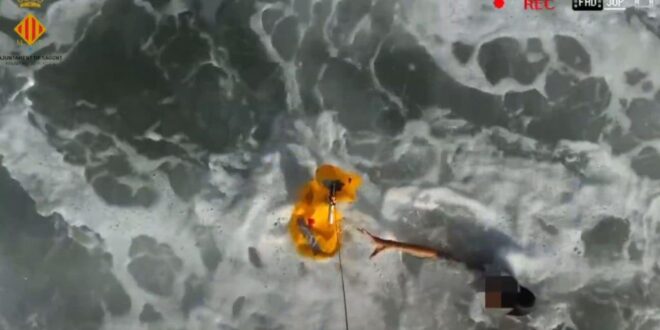 2.35 pm : July 25 – A Costa Blanca lifeguard drone has saved a 14-year-old boy from drowning off the Valencian coast according to an ITV News report.

After identifying that the boy was in trouble, the drone was activated and was able to get to him where it dropped a life vest. The boy was able to grab onto it and stay afloat until help arrived.

Miguel Angel C, Drone Pilot for General Drones, the firm that supplies the technology said: “When we arrived, what we saw was a kid that was in very bad shape, with almost no energy to keep floating, so I sent over the life vest.

“Because of the heavy waves it was a complicated manoeuvre, but we finally managed to give him the vest and he could float until the lifeguards reached him by jet ski.”

Following his rescue, the 14-year-old boy who has not been identified was taken to the hospital. He was released the next day after receiving treatment.

Pedrero added: “These extra seconds are vital in some cases and also allow the rescue teams to approach the person more calmly and cautiously.”

Accidental drowning claimed the lives of 140 people in Spain during the first six months of 2022, a rise of nearly 55 per cent over 2021 according to the Royal Spanish Lifesaving and Rescue Federation.

8.47 am : July 23 – The Costa Blanca North is once again employing lifeguard drones to keep a watch out for people who get into trouble in the waters off their shores.

The Valencia Community announced on Friday, July 22 that the number of drones would be increased following a test operation last year that resulted in at least six lives being saved.

Gabriela Bravo, Minister of Justice, Interior and Public Administration for the Community, said that with 24 drownings already this year that: “We are multiplying efforts with emergency services, lifeguards and town halls to reduce an unaffordable number of victims.

“Unmanned aircraft have become an extremely useful tool that allows the rapid detection of people who are in danger over the sea. During the last campaign, the drones of the Valencian Agency for Security and Emergency Response saved six lives in direct rescue actions.

“851 flights that were carried out over a total of 2,137 kilometres of coastline. The rescue of these six people fully justifies all our efforts.”

Bravo added: “The drones improve our response capacity against possible drowning because we will detect people in danger more quickly, with drones able to be launched in just five seconds and with a top speed of 85 km/h are able to reach the area where the emergency is taking place within minutes.

“Where necessary a lifesaver is also dispatched to the area ensuring that those in danger are reached more quickly. The drones are also connected with the First Aid and Rescue services of the Town Halls enabling them to carry out surveillance support tasks in the bathing areas”.

A total of 20 drones are being deployed along the coast of the Community, with units being provided to Altea, Benidorm, Dénia and Javea.

With the Costa Blanca North expecting an influx of visitors over the summer, the lifeguard drones will according to the Community be an essential part of the region’s efforts to keep people safe by keeping a drowning watch.

Thank you for taking the time to read this article, do remember to come back and check The Euro Weekly News website for all your up-to-date local and international news stories and remember, you can also follow us on Facebook and Instagram.

Previous Medicine and the metaverse: New tech allows doctors to trave…
Next Tips to Implement an Enterprise Drone Program