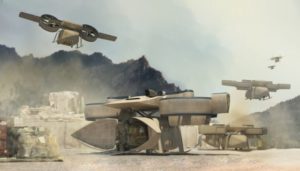 Uber Gives the Army a Sweet Ride to Quieter Drones

When it comes to quieter drones of the future, the U.S. Army might be calling an Uber to assist.

The military’s analysis laboratory will companion with the ride-sharing large in a Cooperative Research and Development Agreement to “advance technologies supporting Future Vertical Lift (drones),” – with an emphasis on growing silent UAVs.

Announced throughout a technical summit in Los Angeles final week, the Lift venture will probably be targeted on drone security and stealth.

“The research that we will collaborate with Uber to do will actually deliver unprecedented capability for quieter rotor systems in a unique configuration,” mentioned Dr. Jaret Riddick, director of the U.S. Army Research Laboratory’s Vehicle Technology Directorate.

Military officers state one venture purpose it to “include the ability to give the Soldier of the future silent operations.” The Army additionally seeks fixed-wing drones that won’t require a runway and may carry bigger payloads.

“We have extensive experience in rotorcraft aero-mechanics,” mentioned Dr. Rajneesh Singh, a crew chief in the ARL’s Vehicle Technology Directorate. “By definition this is a very multi-disciplinary field. It requires expertise in different technical areas and we have such a group.”

“I’m really confident because we have willing partners on either side,” Riddick mentioned. “Uber, with their objective for urban transportation, the air-taxi, as they call it and the Army with its objective of silent operations as a capability for the future unmanned aerial vehicle fleet for the Soldier.”

The settlement cements Uber’s place as a participant in the drone sector. In 2017, the firm named Los Angeles as the second check metropolis for its nascent drone taxi service. Uber additionally partnered with NASA to assist develop UTM (Unmanned Traffic Management) applied sciences at low altitude. The firm plans to check flights in LA by 2020.

Jason is a longstanding contributor to DroneLife with an avid curiosity in all issues tech. He focuses on anti-drone applied sciences and the public security sector; police, hearth, and search and rescue.

Beginning his profession as a journalist in 1996, Jason has since written and edited hundreds of partaking information articles, weblog posts, press releases and on-line content material. He has received a number of media awards over the years and has since expanded his experience into the organizational and academic communications sphere.

In addition to his proficiency in the subject of enhancing and writing, Jason has additionally taught communications at the college degree and continues to lead seminars and coaching classes in the areas of media relations, enhancing/writing and social media engagement.