Today’s OMG: Mercedes-AMG G63 Pickup Truck with an Onboard D…

Brabus is probably best known for giving Mercedes-AMG products some fancy bodywork and huge injections of power, and that’s exactly what it has done to the latest Mercedes-AMG G-Class. Enter the Brabus XLP 800, a custom pickup-truck version of the already outrageous G63 AMG SUV with a V-8 engine boosted to nearly 800 horsepower. In case that failed to move your interest needle, did we mention that the XLP 800 includes a drone and a landing platform for it in the pickup bed? It’s for rescue missions—at least that’s what Brabus says.

To create this beast, Brabus stretches the G63’s wheelbase by about 20 inches and then tacks on a truck bed. Brabus also fits a roof rack, a carbon-fiber wind deflector, running boards with LED lighting to make them easier to use at night, carbon-fiber fender flares, and a carbon-fiber hood with a couple of extra air intakes. Yes, that is a lot of carbon fiber. And no, we don’t think the material’s lighter weight does much of anything to offset the XLP 800’s surely considerable mass.

Under that carbon hood lurks a tuned version of AMG’s now-ubiquitous twin-turbo 4.0-liter V-8. Keeping with the Brabus tradition of “more is more,” the engine has inherited more than 200 horses, bringing total output to 788 horsepower. Credit larger turbos that produce even greater boost and a few other pieces of trick tech, like a specially designed blow-off valve, for the extra power. Also, the engine now makes 737 lb-ft of torque, you know, because why not?

Brabus also fiddled with the suspension settings and developed a custom version of Mercedes’ ride-control system, essentially a set of coilovers specifically tuned to work with the XLP’s new portal axles and extra 20 inches of ground clearance. The 800 XLP sits on forged, 22-inch monoblock wheels with massive Pirelli Scorpion ATR all-terrain tires that measure 325/55 at all four corners.

All of this trick go-fast-anywhere tech is cool, but the XLP 800’s pièce de résistance has to be that Wingcopter eVTOL (Vertical Take Off and Landing) drone stuck in the bed. The German drone company developed the unit specifically to deliver emergency supplies to people stranded in remote areas and rough terrain. So if your Brabus 800XLP can’t make it where you need it to, it’ll at least get close enough to give the drone a fighting chance at helping those in danger. Meanwhile, you can kick back in the fully customizable interior that, need we remind you, started life as a plush G63 cabin before Brabus made it even more, um, more.

While we’re sure your local mountain rescue team will stick with its not-hyper-luxurious, not-high-performance off-road SUVs, you can pick up one of these Brabus-fettled Mercedes-AMG G63s for your own expeditions. There’s no word on how much this excellence costs, but let’s just assume it will be a pretty penny more than the $144,695 Mercedes charges for a regular, drone-free G63 AMG. 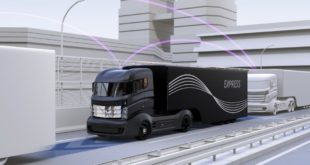 Will Truck Convoying Be The First Viable Commercial Applicat…