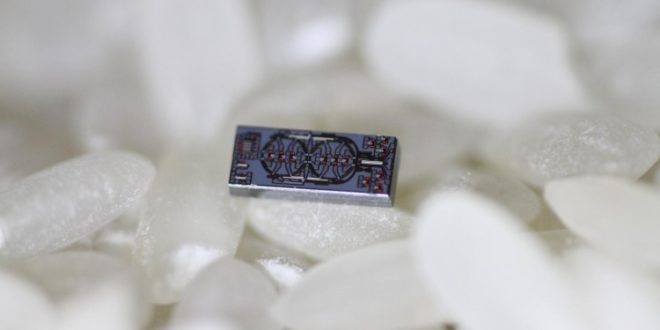 Tiny optical gyroscope could find a home in phones and drone…

Engineers at the California Institute of Technology (Caltech) have created the world’s smallest optical gyroscope, a sensor that could be used in smartphones and drones.

The tiny device, which is smaller than a grain of rice, determines its position in three-dimensional space using what’s known as the Sagnac Effect. Based on the principles of general relativity, the Sagnac Effect occurs when a beam of light is split and the two resulting beams travel in opposite directions in a circle, arriving at the same light detector. Despite the fact that the speed of light is constant, rotating the plain in which these beams move causes one beam to arrive earlier than the other. When these loops are placed on each axis of orientation, the Sagnac Effect can be used to determine spatial position.

As optical gyroscopes are built smaller and smaller, so too is the signal that captures the Sagnac effect, which makes it more and more difficult for the device to detect movement. Up to now, this has prevented the miniaturisation of optical gyroscopes, with the smallest high-performance devices bigger than golf balls.

The Caltech team overcame this problem through the development of a new technique called “reciprocal sensitivity enhancement”. Imperfections in the optical paths that the beams travel in can cause thermal fluctuations or light scattering, which can lead to reciprocal signal noise. Led by Professor Ali Hajimiri, the Caltech engineers were able to remove this reciprocal noise while leaving signals from the Sagnac effect intact. It was this breakthrough that ultimately enabled them to dramatically miniaturise the technology.

Previous Drones deployed to archive sacred Indigenous areas and cultu…
Next Everything You Need to Know to Grow Your Drone Business: Int…