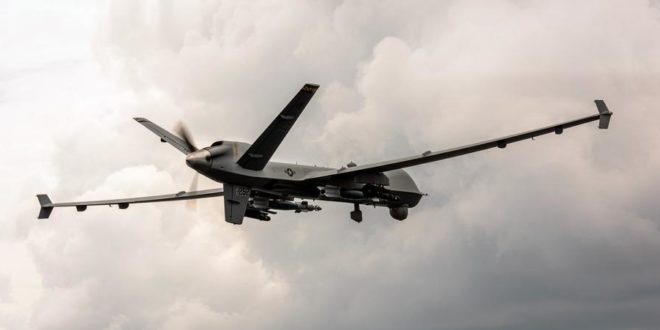 The U.S. Air Force’s Next Killer Drone Could Fly And Fight A…

The U.S. Air Force wants a new hunter-killer drone to replace its current fleet of 306 propeller-driven MQ-9 Reapers. And it could end up including a version of the service’s Skyborg artificial intelligence.

Where the Reaper is pretty dumb, the new drone could be very clever. Flying and fighting mostly on its own—and learning through experience.

The Air Force on June 3 released a request for information to the aerospace industry for a next-generation unmanned intelligence-strike platform. It wants the new drone to be combat-ready in 2031.

“The acquisition strategy has not yet been determined,” the Air Force stressed. In other words, no one knows yet how much it should cost.

“The hunter-killer mission set provides a unique capability of combined [intelligence, surveillance and reconnaissance] and strike attributes in a single platform fulfilling the highest demand of all Air Force assets through vast capacity.”

The service does know what degree of autonomy it wants. A two-person crew sitting in a trailer, sometimes thousands of miles away, steers a Reaper via satellite.

The new drone, by contrast, should feature “autonomy, artificial intelligence [and] machine-learning,” among other capabilities, the RFI states. Specifically, the next-gen hunter-killer should include Skyborg, the advanced A.I. that the Air Force Research Laboratory is developing.

Skyborg is a “dial-able” A.I. A human operator could decide before a mission how autonomous the drone should be.

AFRL is still working on the tech, so it’s not quite clear what the upper limits of autonomy might be. Could Skyborg navigate on its own? Search for its own targets? Automatically dodge enemy fire? Fire weapons with minimal human oversight?

“Skyborg is a vessel for A.I. technologies that could range from rather simple algorithms to fly the aircraft and control them in airspace to the introduction of more complicated levels of A.I. to accomplish certain tasks or sub-tasks of the mission,” said Matt Duquette, an AFRL engineer.

AFRL has been clear that, for now, Skyborg could fit any number of different airframes. “Skyborg is not scheduled for any particular type of aircraft platform at this time,” the laboratory stated.

The Valkyrie drone, a sort of robotic wingman for F-15s and F-35s, will include the Skyborg A.I. when it debuts in the mid-2020s. The Reaper replacement could be the second major drone type to haul the A.I. into combat.