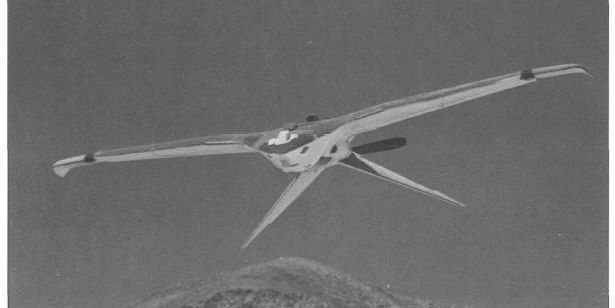 At the height of the Cold War, America’s military industrial complex was churning out impressive airplanes designed to spy on the Soviet Union and other communist countries. The speedy SR-71 Blackbird and high-flying U-2 Dragon Lady spy planes, for example, were big, impressive planes designed to outrun or outfox enemy air defenses. These planes set records for speed, operating altitude, and are still considered technical marvels today.

Then there was Project Aquiline, one of the most unusual—and complicated—technical espionage efforts of the Cold War. The project envisioned a fleet of 12 bird-shaped drones, powered by nuclear energy, that could stay aloft for up to a month. The drone, which was supposed to act as a robotic spy plane and courier for secret payloads, was never completed. The CIA recently declassified and posted documents pertaining to Project Aquiline.

The CIA planned Aquiline to be the first uncrewed intelligence collection platform. The program’s mission was to “develop, attain, and maintain an operational capability to conduct covert reconnaissance in denied areas.” The drone, to be designed by aviation defense contractor McDonnell Douglas, was very different from the glamorous fighter jets for which the company was known.

Aquiline was a small drone, meant to be kept as close to bird-like size as possible—five feet long, 7.5 feet wide, and a takeoff weight of 83 pounds—under the constraints of the technology of the time. A silent 3.5-horsepower, four-cycle engine would give the drone a speed of 47 to 80 knots and an endurance of 50 hours and 1,200 miles. Aquiline’s maximum altitude was estimated at 20,000 feet.

Nuclear power promised to give Aquiline even greater range. The CIA proposed to install a radioisotope propulsion system on the flying drone, one that would convert waste heat from decaying isotopes (like plutonium) into electricity. Such an engine, developed primarily for deep space probes, would boost the drone’s endurance to an astonishing 30 days or 36,000 miles.

Aquiline was designed to carry both photographic and intelligence payloads. It could take overhead photographs of sensitive sites while flying much lower than the U-2 spy plane, and would scoop up electronic signals of radios, radar, and other devices for later analysis.

Unlike manned planes, Aquiline could fly much closer to its targets, producing high resolution photographs and recording stronger electromagnetic signals. The drone could also secretly drop off payloads of specially developed sensors near sites the CIA wanted to closely monitor.

The aircraft was originally based on the characteristics of large, loitering birds, but this changed in time to include actual bird-like characteristics. The CIA described Aquiline as a “small, bird-like surreptitious vehicle with sufficiently small acoustic, visible, and radar cross section to permit it to operate in the natural physical signal environment of living birds.” Radars and human sentries at sensitive sites would mistake Aquiline for a bird and pay little attention to it.

Aquiline would be launched, controlled, and recovered by mobile ground crews. These crews could operate Aquiline from front-line states bordering the Soviet Union or China, in places like Taiwan, Turkey, Norway, or elsewhere, in order to maximize the amount of time the drone could operate over enemy territory.

The tiny drone would then beam its data to a specially modified DC-6 (later changed to a U-2R reconnaissance plane) loitering nearby, ensuring that the drone need not carry its own data storage devices. Data storage at the time was large and cumbersome, consisting of punch cards, tape, or extremely large hard disk drives, driving up weight and power requirements.

The bird drone was supposed to be developed at Area 51, with the various documents listing the personnel requirements and what it would take to fly engineers to and from the mysterious base on a regular basis. The program was top secret, with access doled out on a strictly “need-to-know” basis. The program was so secret, in fact, that it recommended personnel be recruited two years before first flight to ensure enough personnel could pass the necessary security checks.

It’s not clear why Aquiline was canceled. It would have been a highly complex technical program, with issues of stealth, data transmission, and propulsion all in a very small package. The use of a radiothermal generation would have added an even higher level of complexity, all of which might have been insurmountable with 960s technology.

Aquiline was also heavily reliant on a ruse, and if the Soviets or Chinese found out about it, their anti-aircraft fire or MiG fighter jets could have easily shot it down. In the end, Aquiline was no more than a glimmer in the eye of a small few in the intelligence community.

Previous The Forecast for Passsenger Drones is Sky High
Next Disinfection by Drone: A New Application for Our Times