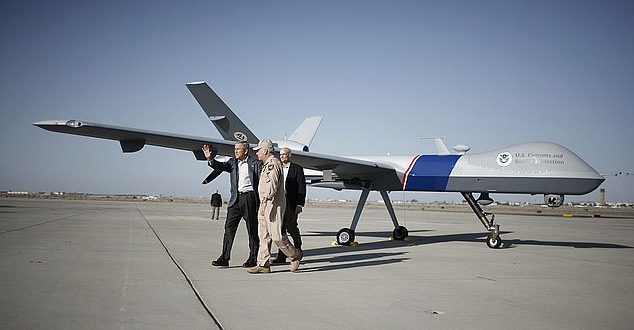 U.S. Customs and Border Protection have been criticized for flying a predator drone usually used to track and kill terrorists over Minneapolis as the city entered its fourth day of intense protests over the killing of George Floyd.

Civil right advocates condemned the agency for flying the drone over the city which lies outside the 100-air mile border zone where CBP has jurisdiction.

They branded them a ‘rogue agency’ that the government ‘need to defund’ for policing protesters within U.S. borders.

The Predator B drone with the call sign CBP-104 was spotted circling Minneapolis on Friday morning at 20,000 feet, making several flights around the city.

The agency confirmed the flight and said the drone was being used to provide live video on the request of federal law enforcement in Minneapolis.

In a statement it argued that it ‘carries out its mission nationwide, not just at the border’.

Predator B drone used for aerial surveillance by the U.S. Customs and Border Protection. The agency was criticized Friday for flying the drone over protests about the killing of George Floyd in Minneapolis which lies outside their general jurisdiction 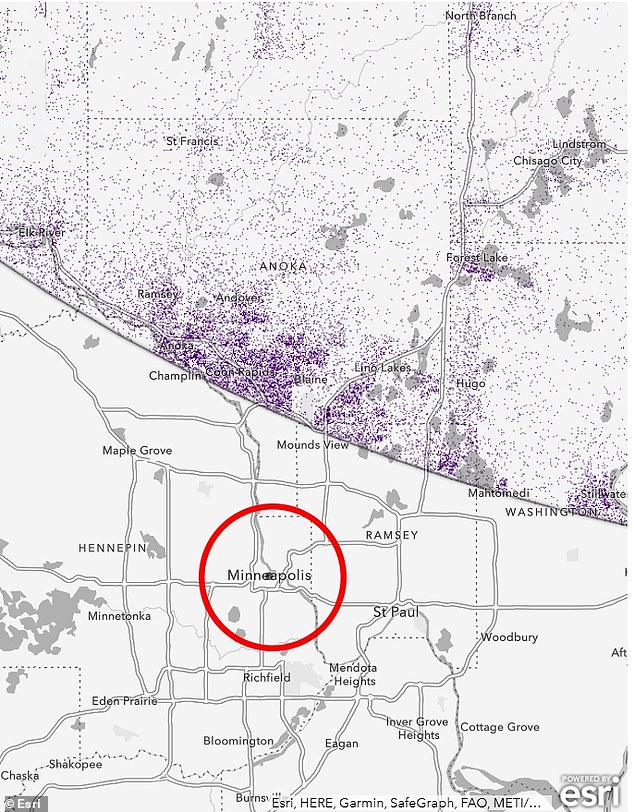 The confirmation of the drone flight emerged as protests in the city continued over the death of Floyd, a black man who died in police custody on Monday.

Video of the moments before his death showed a police officer pinning Floyd to the ground while he said he couldn’t breathe.

The police officer who knelt on Floyd’s neck as he begged to be let go was arrested for his murder on Friday.

The flight was first spotted by investigative reporter Jason Paladino, from the Project on Government Oversight, who reported that the predator drone was circling Minneapolis after taking off from Grand Forks Air Base in North Dakota.

The flight path was in a hexagon above the city at exactly 20,000 ft before flying directly over the city. Its flight lasted between around 10 am and 1:15 pm.

The Predator B drone is an unmanned aerial vehicle and can be used by the CBP to monitor an area for hours on end.

According to Gizmodo, they are equipped with powerful cameras designed to capture clear video from as far up as 25,000 feet in the air and are cleared to operate within 100 air miles of the border.

Maps from CityLab show, however, that Minneapolis does not fall under the area cleared for the CBP’s drones to fly.

Yet The Intercept notes that the agency has claimed international airports as a border crossing point previously through which they can extend the boundaries of their jurisdiction.

The flight was first spotted by investigative reporter Jason Paladino , from the Project on Government Oversight, who reported that the predator drone was circling Minneapolis after taking off from Grand Forks Air Base in North Dakota 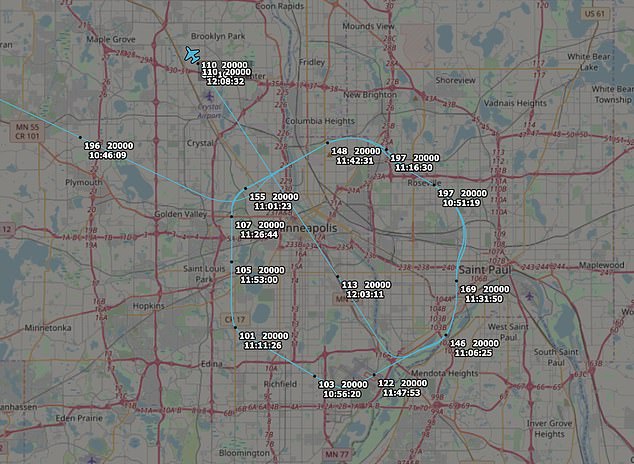 The drone with the call sign CBP-104 was spotted circling Minneapolis on Friday morning at 20,000 feet, making several flights around the city before flying straight over back to base

CBP also argued in a statement about the flight that they often aid other federal authorities within U.S. borders.

‘AMO [Air and Marine Operations] carries out its mission nationwide, not just at the border, consistent with federal laws and policies,’ it said in a statement to Gizmodo.

‘During humanitarian missions AMO regularly deploys the unmanned aircraft system to assist FEMA in assessing hurricane affected areas, in coordination with the National Weather Service to capture imagery of storm impacted areas, and with federal, state and local partners to conduct search and rescue missions, in addition to its law enforcement mission.’

According to Buzzfeed, CBP informed congressional staffers about the drone flight on Friday in which they also argued they are used on humanitarian missions.

The statement said that the flight was ordered so that the agency’s Air and Marine Operations could ‘provide live video to aid in situational awareness at the request of our federal law enforcement partners in Minneapolis’.

It added that the agency argued often uses drones to ‘routinely conducts operations with other federal, state, and local law enforcement entities to assist law enforcement and humanitarian relief efforts’. 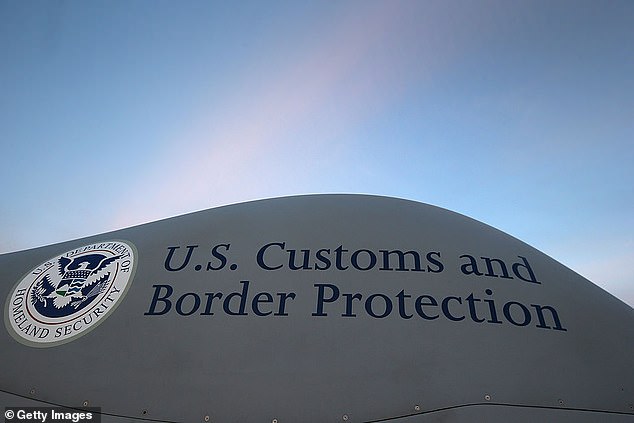 The drones, pictured, are cleared to operate within 100 air miles of the border but Minneapolis lies outside of this jurisdiction. CBP said it was called in by federal law enforcement 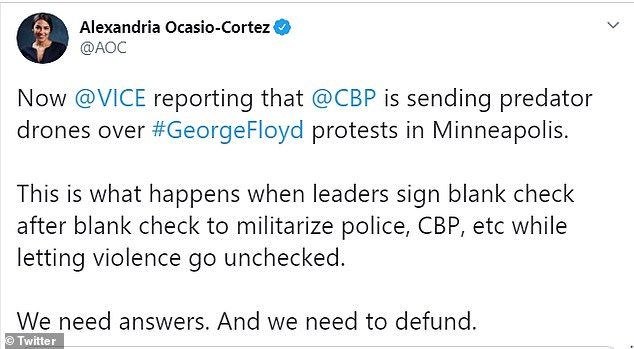 ‘After arriving into the Minneapolis airspace, the requesting agency determined that the aircraft was no longer needed for operational awareness and departed back to Grand Forks,’ the statement added.

The drone’s flight has drawn criticism from civil rights advocates, however, who claim that the agency was ‘rogue’ for surveying protesters within U.S. borders.

‘And CBP has no role in what’s happening in Minneapolis at all.

‘This rogue agency’s use of military technology to surveil protesters inside US borders is deeply disturbing, especially given CBPs lack of clear and strong policies to protect privacy and constitutional rights. This agency’s use of drones over the city should be halted immediately.’

The move was also criticized by Democratic Congresswoman Alexandra Ocasio-Cortez who took to Twitter to write, ‘This is what happens when leaders sign blank check after blank check to militarize police, CBP, etc. while letting violence go unchecked.

‘We need answers. And we need to defund,’ she added.

This is not the first time that aerial surveillance has been used to track Black Lives Matter protesters.

According to Business Insider, the FBI used manned aircraft to carry out surveillance activities over Baltimore after the 2015 death of Freddie Gray in police custody.

Vice notes that unarmed Predator drones were first used within the United States in 2012, when the Department of Homeland Security flew one over the property of a cattle farmer to end a 16-hour stand off between him and another rancher. 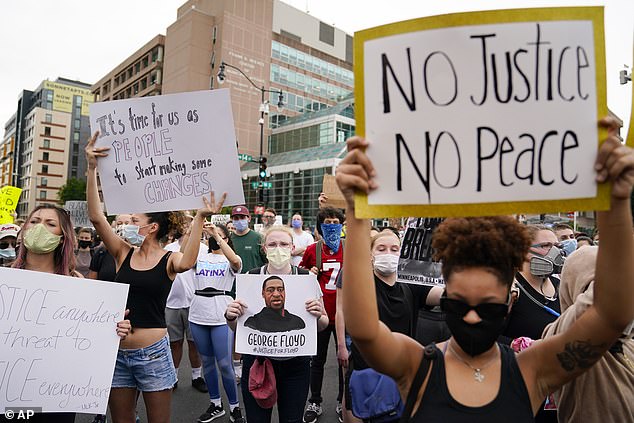 The drone flew over Minneapolis as the ity entered its fourth day of intense protests over the killing of George Floyd. Pictured, demonstrators gathered on Friday 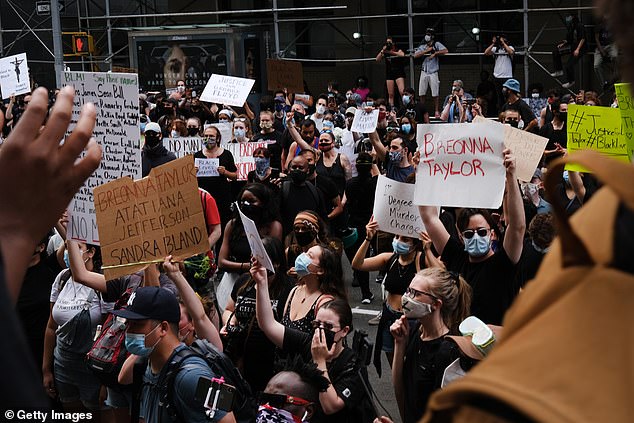 Protests also continued in New York, pictured, and the White House went into lockdown as protesters tried to scale the walls. Violence has erupted across the US for a fourth night, with protesters gathering at  Minneapolis, his hometown of Houston and  Washington DC

On Friday, the White House went into lockdown as protesters tried to scale the walls, battled with Secret Service and burned American flags during protests over George Floyd’s death.

Violence has erupted across the US for a fourth night, with protesters gathering at the city where Floyd was killed Minneapolis, his hometown of Houston and the home of US democracy Washington DC.

The protests have now reached the seat of the US government, with protesters marching to the White House, sending it into lockdown.

Secret Service officers have stopped anyone entering the White House grounds, where President Trump is currently in residence, after a demonstrator tried to scale the fence in Lafayette Park to get inside.

Minneapolis police officer Derek Chauvin has been taken into custody over the death of Floyd, four days after he was seen kneeling on his neck in a video of his arrest that has sparked violent protests across the country.

Chauvin was one of four officers fired over Floyd’s death earlier this week however, Harrington did not provide details on the other three cops.

The state attorney who would oversee any prosecution on state charges, whose home was also the site of protests, is scheduled to provide an update later Friday.

Protests over Floyd’s death have spread nationwide and has resulted in rioting in Minneapolis, where a police precinct was overrun and set on fire overnight on Thursday. 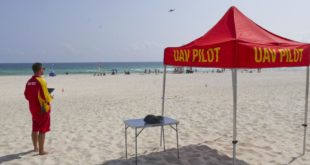 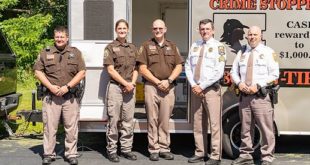 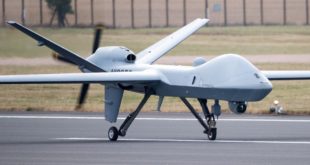