As if 2020 were not dystopian enough, ThickSkin has created an intense physical-theatre two-hander about living as automatons under an all-consuming regime. Our days under lockdown might be relentless but they’re nothing compared with the drudgery of Petrichor. Imagine the soul-crushing visions of Fritz Lang’s Metropolis and Charlie Chaplin’s Modern Times repurposed for the digital age and you’ll have a sense of the production’s mood of hi-tech alienation.

This should strike a chord with the company’s target audience of “young people who have least access to the arts”, especially at a time when society is so atomised. The sci-fi scenario might be fanciful, but there is no denying the hallucinogenic impact of the staging.

It’s designed to be seen on tablet, smartphone or, for the full immersive effect, virtual-reality headset, which places you at the centre of a studio theatre bombarded by fragmentary graphics and flickering illustrations. Dancers Dominic Coffey and Ayesha Fazal play new recruits to the brave new world of Petrichor where all decisions are made for them and life proceeds without variety. Eat, sleep, work – repeat.

Directed and choreographed by Jonnie Riordan and Jess Williams, the performers move in neurotic, repetitive patterns, their body language locked-in and repressed. They are propelled through their drone-like days by a percussive score by Neil Bettles. Its busy rhythms make the cast’s exertions appear more restless than repetitive.

Like the music, the graphics are fidgety and pulsating. They symbolise industrial overload. Jim Dawson’s towering monochrome visuals and Ben Walden’s expansive animations dwarf the performers, emphasising their place as cogs in the machine. It’s a simple scenario, but the atmosphere is woozily gripping. 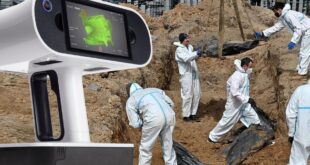