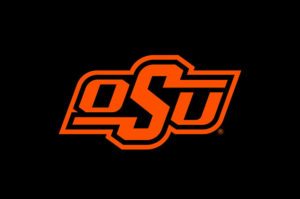 Oklahoma State University’s Oklahoma Aerospace Institute for Research and Education (OAIRE) has launched a Counter-UAS Center of Excellence (CUAS COE), as well as a new partnership agreement seeking to fortify national defense through the development of counter-measures to disable malicious Unmanned Aerial Systems (UAS). The partnership was announced during a launch event celebrating the CUAS COE on Friday at the Hamm Institute for American Energy at OSU in the Oklahoma City Innovation District. 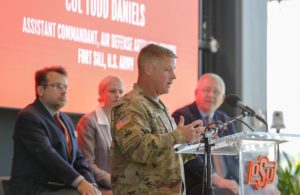 “By working together, we are setting the national standard for counter-UAS. The possibilities for the future of aerospace at OSU in Oklahoma and for the United States are far reaching and it’s all built on a bedrock constructed from decades of experience,” said OSU President Kayse Shrum. “This center will change what’s possible with national security. It will advance research and strengthen the Oklahoma economy as we merge civilian and military worlds into a partnership that will exponentially improve the mission of both. We are working with industry and federal agencies to coordinate and evaluate technology to ensure the U.S. retains the lead in UAS and counter-UAS technology for the foreseeable future.”

The center was built in partnership with the DOD through the National Defense Authorization Act. The U.S. Army Combat Capabilities Development Command contracted with OSU to begin developing the CUAS COE with an endowment of $6.5 million across FY2021 and FY2022, and a further $5 million pending for FY2023. As a part of OAIRE, the center is a crucial element of OSU’s aerospace infrastructure, covering the state of Oklahoma. The center will also serve to upgrade facilities enabling both it and U.S. Army partners to rapidly deploy UAS systems for research, testing and training.

“What I’ve seen as a soldier from the OSU USRI team — from what’s going to be the Center of Excellence for counter-UAS at OSU —  is very encouraging to see the open dialogue,  communication, thought and brilliant minds that put a lot of effort and work to solve these problems,” said Col. Todd Daniels, assistant commandant for the air defense artillery school at Fort Sill. 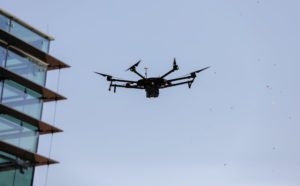 Throughout the next four and a half years, the partnership agreement will fund up to $15 million in a series of projects at the center, including the development and advancement of technologies for DHS to address drone-based threats, as well as training DHS professionals in counter-UAS technologies and techniques.

“The Oklahoma aviation aerospace industry has $44 billion of annual economic activity and is the second largest industry in the state behind energy,” said USRI director Dr. Jamey Jacob, who was named director of OAIRE during the event. “With the advent of the new advanced air mobility industry, Oklahoma has an opportunity to leverage its expertise in aerospace and autonomous systems to lead in the newest and fastest growing field of aviation and secure a global impact throughout the 21st century. We are working with our partners in both military and civilian sectors of the government and supporting industry as we help to develop and evaluate new solutions at the center part of our land grant mission to keep Americans safe and secure, defending all degrees of freedom.”

The center currently has plans in place to host an annual counter-UAS symposium, gathering representatives from across the government to review new threats, technologies and best practices, as well as connecting with private industry to satisfy governmental CUAS requirements.