Washington • A bill that Democratic and Republican senators introduced Thursday would ban the sale of advanced armed drones to any nation that is not a close U.S. ally, according to lawmakers and congressional aides.

The proposed legislation is aimed at halting an effort by the Trump administration to bypass an arms control pact that the United States helped establish in 1987. The agreement, known as the Missile Technology Control Regime, is not legally binding, but its 35 signatories have generally abided by it.

The Trump administration announced in 2018 that it was expanding drone sales, but officials then debated for two years on how to circumvent the arms control pact. U.S. officials failed to persuade counterparts from other member nations to agree to change the language in the pact that bans the sale of large armed drones.

But last month, President Donald Trump and the State Department announced they would simply ignore the restrictions set by the agreement and begin distributing licenses.

The move set off a wave of criticism from many Democratic and some Republican lawmakers, who said the decision undermined the pact. By ignoring a part of the agreement it finds inconvenient, they say, the Trump administration is encouraging other nations to do the same. And the sale of advanced armed drones could lead to the proliferation of the technology across the globe.

The lawmakers are especially concerned about sales to Saudi Arabia and the United Arab Emirates, which have used U.S.-made weapons to carry out a devastating war in Yemen that has left thousands of civilians, many of them children, dead.

“If we allow Trump to start selling drones, we set a dangerous precedent that allows and encourages other countries to sell missile technology and advanced drones to our adversaries,” Sen. Chris Murphy, D-Conn., a sponsor of the bill, said in a statement Wednesday. “In addition, the president’s action will only further enable the Saudis to continue killing more innocent civilians in Yemen by supplying them with advanced U.S.-made drones.”

Another sponsor of the bill, Sen. Mike Lee, R-Utah, generally advocates limiting the powers of the federal government and restraining U.S. involvement in wars.

Under the bill, exceptions to the sales ban would include members of the North Atlantic Treaty Organization, as well as Australia, New Zealand, South Korea, Japan and Israel.

Murphy said that by making parts of the arms control pact legally binding, “Congress can stop Trump in his tracks.” He noted that “doing so will protect innocent civilians, stop an arms race from spiraling out of control and strengthen U.S. national security and our interests abroad.”

U.S. intelligence agencies are also scrutinizing whether Saudi Arabia could trigger a nuclear arms race in the region. In recent weeks, they have circulated an analysis examining whether the kingdom aims to develop nuclear weapons based on early efforts at producing nuclear fuel.

The White House and Congress have long clashed over arms sales to Saudi Arabia and the United Arab Emirates. Last year, lawmakers passed a bipartisan resolution that would require the U.S. government to end its support for the war in Yemen, but Trump vetoed the measure.

Since 2017, senators from both parties have put holds on packages of proposed arms sales to the two Persian Gulf countries. In May 2019, Secretary of State Mike Pompeo declared an “emergency” over Iran’s activities in the Middle East to push through $8.1 billion worth of sales of munitions to those countries, which are adversaries of Iran.

That incensed Congress, and some lawmakers asked the State Department inspector general at the time, Steve A. Linick, to investigate whether Pompeo had acted illegally. Linick did so in June 2019, and the inquiry was near completion this May when Trump fired Linick, at the urging of Pompeo. Three congressional committees are now investigating that dismissal and trying to scrutinize Pompeo’s push over the arms packages.

The arms control pact bans the sales of drones that can carry at least 500 kilograms, or over 1,100 pounds, of weapons over 300 kilometers, about 186 miles. That includes the MQ-9 Reaper made by General Atomics, based in San Diego. This year, General Atomics stepped up efforts to lobby U.S. officials to bypass the arms control pact and allow sales of advanced armed drones.

Arms sales to the Gulf nations have strong support in the White House. Trump has backed such sales, as have Peter Navarro, a trade adviser, and Jared Kushner, the president’s son-in-law and adviser on the Middle East. Using WhatsApp, Kushner stays in close touch with Crown Prince Mohammed bin Salman of Saudi Arabia, the de facto ruler of the country. Congressional opposition to arms sales to Saudi Arabia gained enormous traction after the killing in October 2018 of Jamal Khashoggi, a Saudi columnist for The Washington Post who lived in Virginia.

Disarmament group calls on Canada to ban exports of military…

‘A risk to firefighters’: Trump’s drone ban makes it harder … 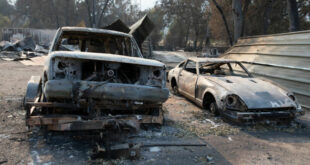