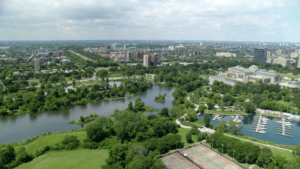 How a Drone Film Uncovers a New View of Chicago

Source: Chicago from the Air

Fans of Chicago (the city, not the band) will soon be treated to a unique, drone view of the Windy City with the release of the PBS film Chicago from the Air.

Narrated by WTTW’s Geoffrey Baer, the film will take viewers on a FPV drone flight across the cityscape.

Premiering Thursday at 7:30 p.m. on PBS affiliate WTTW, the film will “soar, swoop, dive and spiral through and around Chicago’s landmarks, neighborhoods and suburbs,” according to a production spokesperson.

“Through the lens of a high-flying drone camera, we get a breathtaking view of the city that stretches as far as the eye can see. Zoom in to trace the remnants of long-lost roads and landmarks and learn what has replaced them, discover the ways industry literally reshaped our region.”

Trails and Transit Lines by Drone

Baer—a seven-time Emmy Award-winning public television writer, producer and program host—will provide commentary the film as the drone flies over lost neighborhoods, familiar streets that were once Native American trails, and abandoned transit lines that can be seen only from the air. In addition, the film will feature noted architectural landmarks, parks, lakes and sports arenas.

“Chicago from the Air represents an extraordinary opportunity for WTTW to take our inherently curious audiences on a journey of discovery in an innovative way,” WTTW CEO Sandra Cordova Micek said.

“With this new special, we hope to foster curiosity about our great city while inspiring people of all ages to set off on their own adventures.”

“As we were thinking about new and exciting ways to explore Chicago, we came up with the idea to film with a drone from high above the city – the ultimate in social distancing.” Baer added.

“In this show, we not only rediscover our dramatic lakefront, iconic buildings, and parks, but we also see the heroically scaled industry and sprawling infrastructure that have transformed our region – and all from a thrilling perspective.”

The film will include drone footage covering: