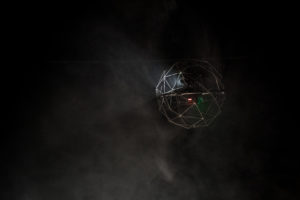 Flyability Joins International CERBERUS Team to Take on the …

Makers of the leading industrial drone for inaccessible spaces, Swiss company Flyability has taken on the DARPA SubT Challenge with international team CERBERUS.  Flyability makes the collision-tolerant Elios, already used in underground and other challenging environments for industrial uses like mining and industrial inspections.

The following is from a Flyability press release.

Project CERBERUS will bring groundbreaking robotic solutions into the field of subterranean deployments. With the goal of supporting public safety professionals in time-sensitive operations or disaster response scenarios in underground environments, CERBERUS envisions the collaboration of walking and flying robots able to perceive the world beyond human’s ability. Through the combination of best of bread products and research projects, it will provide field experts with an autonomous, robust, and reliable way to fulfil their mission even in an unpredictable, and hostile subterranean setting.

“The environments where the challenge is taking place have a lot in common with those where our customers are deploying Elios daily,” says Adrien Briod, CTO, Flyability. “Taking part in the prestigious Subterranean DARPA challenge is an opportunity to collaborate with university laboratories and companies which are the best in their R&D fields.” Flyability is now recruiting specific profiles opening the door to talented graduates to join the Flyability adventure and contribute to the success of team CERBERUS.

Set to win the DARPA SubT Challenge, team CERBERUS will compete in a series of events putting technological innovations to the test, against the rough realities of subterranean environments. These events will include the autonomous exploration of a man-made tunnel network (“Tunnel Circuit”), a multi-level urban underground structure (“Urban Circuit”) and a natural cave environment (“Cave Circuit”). Finally, the “Final Event” will bring together all of these environments pushing the challenge to its climax. The first circuit is scheduled for August 2019.

Team CERBERUS is based on an international collaboration between the Autonomous Robots Lab at the University of Nevada, the Robotic Systems Lab of ETH Zurich, the Autonomous System Lab of ETH Zurich, the HiPeR Lab of U.C. Berkeley, Sierra Nevada Corporation, and Flyability. The cumulative expertise of the team enables the successful development and reliable operation of the CERBERUS system in the SubT Challenge.